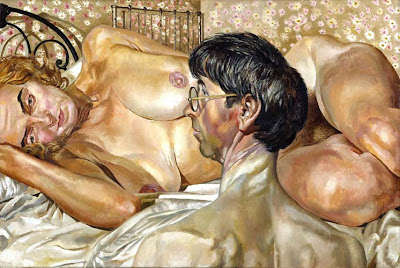 They say that war does things to a man. World War I certainly did a number on the psyche of Sir Stanley Spencer, one of England’s greatest twentieth-century painters. Born June 30, 1891, Spencer served with honor in the First World War and created stirringly beautiful paintings of wounded men on stretchers that conveyed the same grandeur Spencer felt during the experience. Upon returning home to England, Spencer gained fame and success as a painter of war pictures memorializing the men who did not return. In 1925, Spencer married his first wife, Hilda Carline, and they had two daughters. In 1932, however, Spencer met Patricia Preece, a bisexual artist. After carrying on an affair with Preece for several years, Spencer finally divorced Hilda in 1937 and married Preece four days later. Rather than go on a honeymoon with Spencer, Preece instead went with artist Dorothy Hepworth, her other lover. Spencer’s Self-Portait with Patricia Preece (above, from 1936) shows the strange relationship between Spencer and Preece, with the bespectacled Spencer acting more like an audience than a participant in the relationship. “The law does not allow me to have two wives,” Spencer wrote in a 1936 letter he never sent to his wife. “Yet I must and will have two. My development (as an artist) depends on my having both you and Patricia.” Somehow Spencer’s art could only move forward if his personal life became bizarrely complicated enough to reflect his inner demons. 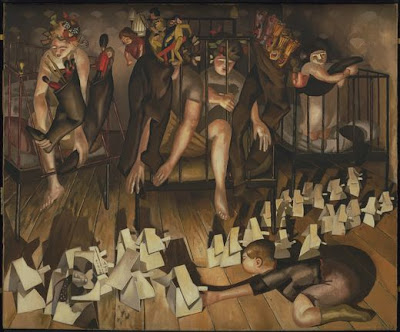 Despite the divorce, Spencer continued to maintain ties with his first wife and their daughters. In The Nursery (above, from 1936), Spencer turns the domestic scene into a surreal world that must have seemed even more unsettling to his family at the time. While Preece fled with Hepworth, Spencer tempted his first wife back to him and seduced her. In a diary he wrote, “For the only time in my life so far, I had the joy of doing what for years I had wanted to do, namely to make love to two women at once.” Fulfilling that fantasy, Spencer left Hilda again to pursue Preece. Preece rejected Spencer, reportedly never consummating their marriage and leaving Spencer utterly alone. When World War II rolled around, Spencer again painted war-related images, eventually earning a knighthood for his service to his country. As complicated as his personal life became, Spencer amazingly managed to segregate his two artistic lives, presenting a patriotic face to the world while the disturbed mind behind it continued to struggle with intimacy issues. 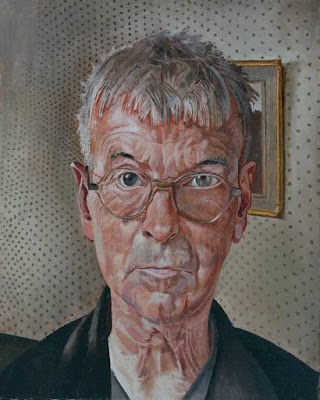 In 1958, Spencer learned that he had cancer. In his final Self-Portrait (above, from 1959), Spencer unflinchingly looks out at the world in extreme close-up. Knowing death was close, Spencer took one last long, hard look in the bedroom mirror and depicted himself with startling honesty. Completely unidealized, Spencer’s final Self-Portrait with its glasses slightly askew and uneven eyes conveys a type of madness that Spencer himself must have diagnosed in himself. Spencer’s brutal honesty and willingness to paint his sexuality at its most troubled set a precedent that later British artists such as Francis Bacon and Lucien Freud followed. In a post- Sigmund Freud world, Spencer’s paintings may have acted as an attempt at a “talking cure,” but one that never cured him.
Posted by Bob at 12:02 AM