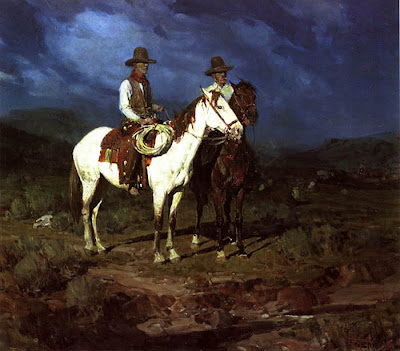 I’ve never been much for Westerns. My father loved them, so I’d sit through tumbleweed-infested flicks and wonder what all the fuss was. Certain films, like The Searchers, certainly caught my attention, but for the most part I found the fantasy of the American West just too fantastic. The art of Frank Tenney Johnson helps ease some of my inborn aversion. Born June 26, 1874, Johnson lived in the Midwest for most of his life before heading to New York City to learn art at the Art Students League of New York under American Impressionist John Henry Twachtman. Johnson headed west soon after, taking Twachtman’s style with him and eventually perfecting the play of moonlight on figures in motion, most often cowboys riding their mounts, as in Texas Night Riders (above, from 1929). In contrast to Frederic Remington, who mythologized the West like no other (my favorite “bad” Remington shows a man loading a rifle on a galloping horse by spitting the bullet down the barrel), Johnson shows remarkable restraint, presenting an idealized vision of cowboys, of course, but one that remains rooted in reality. 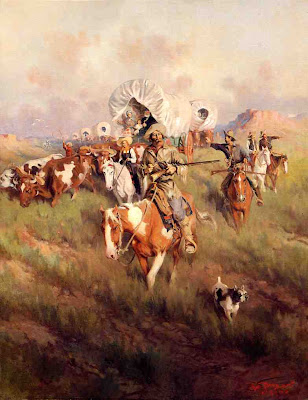 What separates Johnson from Remington may be the fact that Johnson actually spent time on ranches, observing and talking with the men who worked with the animals and faced the obstacles of nature. Remington wove his images out of brief opportunities of observation, taking just enough visual memory back for him to interject his own imaginative flights of fancy. In Ever Westward (above, from 1910), Johnson paints a wagon train of pioneers crossing the continent to the promise of a new life. The painting contains a high level of sentimentality, down to the grizzled old hand leading the pack with his faithful dog alongside, but that dreaminess softens rather than obscures a factual core. Remington would have a horde of “Injuns” pour over the nearest hill and the pioneers desperately circling the wagons, whereas Johnson shows the mostly quiet course of everyday life. Johnson reportedly painted often with his fingers to achieve his effects, just another way that his paintings are “hands on” more than those of other Western artists. 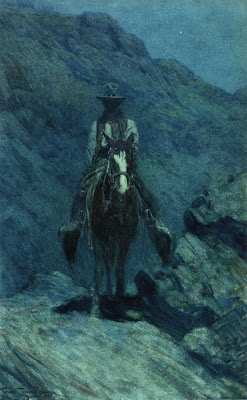 Johnson illustrated many of the Western novels of Zane Grey, adding evocative visuals to Grey’s evocative prose. Grey’s dramatic inventions play right into the stereotypes of the Old West, but his sense of the beauty of the landscape and the cowboy life match those of Johnson well. Johnson’s Nocturne (above, from 1915) seems like something Whistler would have painted had he found himself at home on the range. The range of blues makes this a symphony of tones. The shadow obscuring the rider’s face lends the work a sense of mystery that pulls you into the story being told. The white line running down the horse’s face anchors the entire work. Regardless of subject matter, Johnson knew the art of composition and tonality inside out. Because of his subject matter, however, and his deft handling of it, Johnson belongs with the ranks of those truly American artists who painted American life as it was truly lived.

you are invited to describe (and link) your blog. I hope it's going to be helpful to you...