Few people make the argument for comics as art as entertainingly or eruditely as Craig Yoe, king and head jester of the Arf Lovers court. Following the success of Arf Forum, Arf Museum, and Modern Arf, Yoe now offers Comic Arf: The Unholy Marriage of Art and Comics—Gross National Product as his latest piece of evidence that comics can be both fun and stimulating, both intellectually and, uh, otherwise. Yoe mines the rich ore of comics lore to recover lost masters such as Milt Gross, whose 1930 A Guide to Useful American Citizens (above) seems startlingly relevant today. Unwashed masses (labeled as “The Right Kind of Immigrants”) enter a meat grinder turned by Uncle Sam himself and emerge transformed into “Useful American Citizens,” embodied by a crowd of classic comics characters, including The Yellow Kid, Popeye, Krazy Kat, Barney Google, and many others. Gross encapsulates the entire emotional immigration debate in one humorous image without leaving out any of the political satire. Yoe’s encyclopedic knowledge of comics history allows him not only to find such lost gems but to pick just the right jewels to catch the modern eye today—the litmus test of continued relevance that makes all great art great. 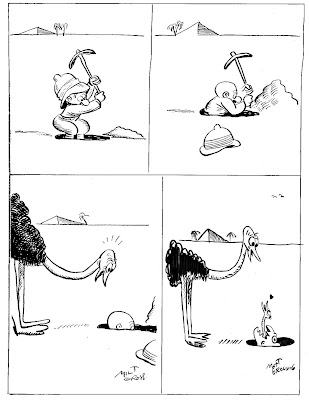 The Arf Lovers series connects the past with the present by having the artists of today engage in an active dialogue with the artists that influenced them. Taking Gross’ 1920s series, “Draw Your Own Conclusions,” in which Gross would leave the final panel of a 4-panel strip blank for people to fill in their own ending and, perhaps, claim a money prize, Yoe challenges a who’s who of modern cartoonists to try their hand at Gross’ game. The Simpsons’ Matt Groening’s attempt (above) gives you a glimpse of the idiosyncratic spin other artists such as Robert Crumb, Mort Walker, Art Spiegelman, Bil Keane, Jules Feiffer, Al Jaffee, Jaime Hernandez, Sergio Aragones, and others put on the punchlines. These responses capture the spirit of Gross’ art, which Yoe describes as “Messy, full of surprises, rule-breaking, stimulating, electrifying, daring, dangerous, and not for the faint of art. Definitely for the screwed, stewed, and tattooed crowd.” For the most part, Yoe allows the art to speak for itself, filling page after page with vintage work often drawn from his personal collection, adding only enough text to guide the reader to the next treasure before stepping aside.

Paging through these Arf Lovers books will make you long for the golden age of newspaper comics. Comic Arf brings back to life in large format the “Right Around Home” series of Dudley Fisher, which Yoe calls “a tour de force in draftsmanship seen from above.” In “Right Around Home,” Fisher would take his cast of characters to a familiar scene, such as the art museum (above), and let them and his imagination run free in a kinetic dervish. Another side of Walt Kelly, famous for his Pogo strip, comes through in the moralizing yet surreal “Contrary Mary and the Angel.” Similarly, Yoe recovers the work of Arch Dale, whose characters “The Doo Dads” may have served as a prototype for “The Smurfs” and may even have inspired the work of Theodore Geisel, aka Dr. Seuss. Such energy and inventiveness flow through Yoe’s own cartooning, a sample of which (“X-Dream It Up”) appears in the final pages of the book. You’ll never accuse Yoe’s work of dry academicism, which is why he brings these classic comics back to life with such full color and fun. 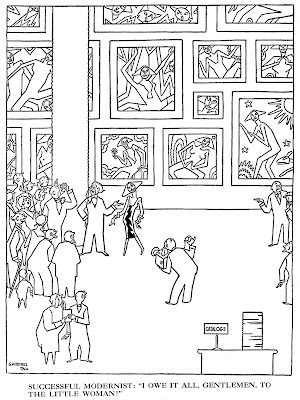 “I owe it all, gentlemen, to the little woman!” announces the artist in Gardner Rea’s Successful Modernist (above), pointing to his Cubist–ly contorted consort as she stands before walls covered with her surprisingly accurate likeness. Looking at Rea, you see the influence of Aubrey Beardsley’s stong line. As Yoe points out, Rea’s gift for placing a single, stunning, centering black (here on the woman’s dress) makes the entire picture—a gift that Beardsley himself shared. The artist’s strangely shaped wife belongs to the tame end of the spectrum of how women appear in many of these comics. Yoe collects the bawdy efforts of cartoonists known better for family-oriented work in Clean Cartoonists’ Dirty Drawings, but gives a taste of that in the work of Argentinian Guillermo Divito, whose curvy pinups with impossibly narrow waists must have seemed more shocking decades ago than they do today. Yoe represents the other side comics lurid coin—horror—with Bob Powell’s “Pit of the Damned,” a Dali-inspired tale pulled from the pre-Comics Code crypt of EC Comics. Looking at such tales today makes you wonder how anyone could imagine they’d corrupt innocent youth rather than spur their imagination on to wilder and more wonderful things.

Yoe titles his last illustration in Comic Arf, “Mental Block Party,” which sounds like a great title for his entire comic history—art history oeuvre. All the comic greats—famous, infamous, and neglected—from yesterday and today get to mingle together and enjoy each other’s company, sharing every gag and the great idea, as we get to eavesdrop on the proceedings. The very serious business of having fun through drawings has no greater champion than Craig Yoe, chief organizer of this never-ending party.

[Many thanks to Fantagraphics Books for providing me with a review copy of Craig Yoe’s Comic Arf: The Unholy Marriage of Art and Comics—Gross National Product and for the images above.]