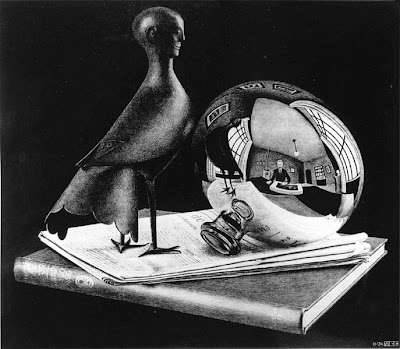 When I went to college, the art poster of choice featured something by M.C. Escher, usually the famous Drawing Hands. Born June 17, 1898, Escher would be amused today to think of his mind-bending illustrations serving as visual aids to drunken and/or high undergraduates, soon to be unemployed drunken and/or high graduates. Part of Escher’s allure is his ability to put so much of his imagination into his works while leaving his own autobiography largely out of them. Still Life with Spherical Mirror (above, from 1934) may be the exception that proves the rule, with Escher making a Hitchcock-like cameo in the reflection on the surface of the spherical mirror, dwarfed by the bird statue that Escher really did keep in his studio. Ever since I read The Dali Renaissance: New Perspectives on His Life and Art after 1940 (reviewed here), a collection of essays on Salvador Dali’s post-1940 art and how it responded to, among other things, twentieth century, post-Einsteinian science, I’ve looked for how other modern artists may have responded to the new world as seen through such scientific breakthroughs. Escher, master of odd perspectives and relative positions, now seems a natural fit. 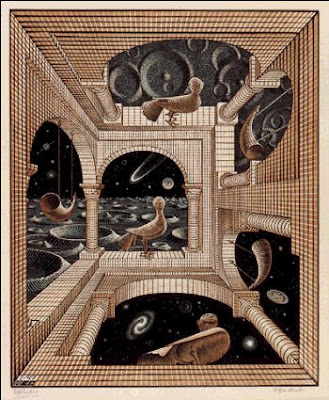 Escher’s bird statue appears again, multiple times, thirteen years later in Another World (above, from 1947). After the United States unleashed the power of the atom on Japan, many artists and intellectuals looked at the outcome and dreamt of putting the genii back in the bottle. Other artists, such as Dali, hoped to find a positive path for a world blessed or cursed with such knowledge. In Another World, Escher seems to see multiple dimensions of possibility thanks to modern physics, which conceived of whole other universes taking directions parallel to or completely different from our own. The bird statue remains a steadfast constant in the windows onto these new worlds, perhaps standing in for Escher himself, who must have loved science fiction, or at least the idea of it. 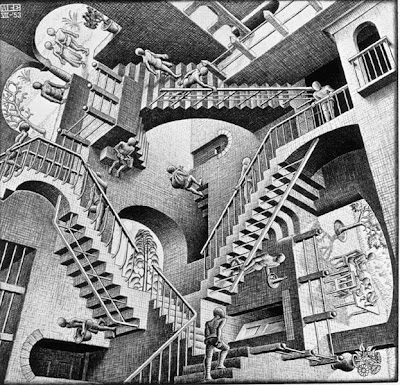 Escher’s Relativity (above, from 1953) seems almost too obvious a reference to Einstein’s famous theory regarding time and space. The figures in Escher’s imaginative space climb up and down staircases in a closed system as warped and curved as the Einsteinian concept of outer space itself. (I wonder what Escher would have done with Stephen Hawking’s ideas regarding black holes.) By the 1950s, the United States and Russia had already locked horns in the pointless Cold War and accompanying militarized space race. Escher’s Relativity may thus be a double-edged commentary on Einstein’s brainchild—giving visual embodiment to his concept of relativity while simultaneously depicting the circular logic and inescapable futility of mutual assured destruction. Thinking about Escher’s works in this lends a whole new meaning to E = mc2.

really awesome stuff. I was rummaging around the internet trying to find a miro pastel drawing called "Woman, October" from 1934 and stumbled onto your blog. I love the ideas you're thinking about. Keep it up