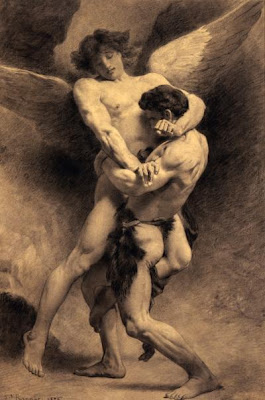 Whenever I see the name Leon Bonnat my mind instantly recalls that Thomas Eakins briefly studied under him in Paris before moving on to the studio of Jean-Leon Gerome. I’ve discussed Gerome’s influence on Eakins elsewhere, which is significant thanks to the greater amount of time they spent together, but I think Bonnat deserves some credit, too, for Eakins’ development. Born June 20, 1833 in France, Bonnat moved to Madrid, Spain, with his family as a teenager, and learned painting from Raimundo de Madrazo y Garreta, a successful Spanish portraitist. Madrazo taught in the classic Salon style, helping Bonnat develop strong draftsmanship, especially when it came to the human figure. Bonnat’s Jacob Wrestling With the Angel (above, from 1876) demonstrates Bonnat’s drawing skills and close attention to the human form in motion and under stress. I can’t help but look at Bonnat’s Jacob Wrestling With the Angel and think of all the wrestling images Eakins went on to paint and photograph. 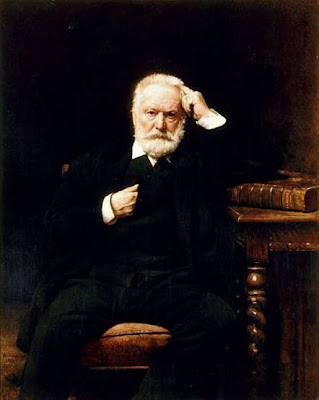 While in Spain, Bonnat couldn’t possibly have avoided the influence of Velázquez, the guiding light for Madrazo and all the other Spanish realists and portraitists. One look at Bonnat’s portrait of the novelist Victor Hugo (above, from 1879) and you can recognize the signature dark background of the Velazquez portrait style as well as the deeply psychological probing of the depiction. Eakins made a pilgrimage to Spain to see the works of Velazquez after studying with Gerome. I’m sure Gerome knew and admired Velazquez, but it may have been Bonnat who first fired Eakins imagination with tales of the great Spaniard and then stoked them even further with his own Spanish-flavored portraiture. (A gallery of more portraits by Bonnat can be found here.) 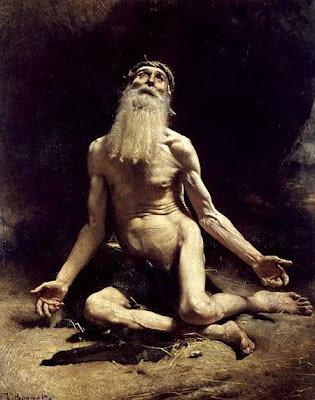 Bonnat’s name has largely faded from the history of art, like so many of the generation of realists caught up in the whirlwind of new movements such as Impressionism that still dominate mainstream art consciousness today. William Coffin, one of Bonnat’s many American students, wrote a great tribute to his teacher in 1922 upon Bonnat’s death, detailing not only Bonnat’s great artistic talents, but also his generosity and humanitarianism. Like Gerome and other great artist-teachers of the late nineteenth century, Bonnat helped usher in the new wave of art that swamped them, teaching such early modernists as Gustave Caillebotte, Georges Braque, and Henri de Toulouse-Lautrec. At no point, however, did Bonnat feel like the Biblical Job he painted in 1900 (above), i.e., abandoned unreasonably by the art gods. While Gerome may have helped foster some of Eakins’ more radical ideas on the human body, I’d like to think that Bonnat taught Eakins some of the professionalism that helped Eakins endure (not always gracefully) “the slings and arrows of outrageous fortune” that those radical ideas invited.