The Last of His Kind 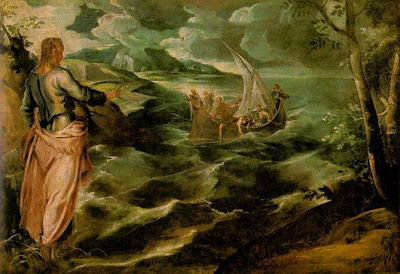 When Tintoretto died on May 31, 1594, you could make the argument that the Italian Renaissance died with him, or at least the last great artist of that world-changing art movement. Born 1518, Tintoretto studied under Titian briefly, but educated himself for the most part by studying the works of Michelangelo and other giants. Titian reportedly tossed the teenaged Tintoretto from his workshop after seeing some of the young artist’s drawings. Whether Titian acted out of jealousy or the realization that Tintoretto was too independent minded to teach is unclear. Tintoretto’s different approach is clearly seen in works such as Christ at the Sea of Galilee (above, from 1580). Rather than dominate the scene from the center, Christ appears to the side, seen from behind, with the Apostles’ boat closer to the center, deep within the image. The agitation of the sea itself mirrors the agitation of the Apostles, a touch the young El Greco appreciated when he saw Tintoretto’s work during his time in Venice and brought back with him to Spain. 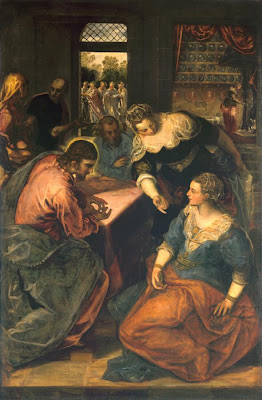 The dynamism of the best of Michelangelo’s works appears in scenes by Tintoretto such as Christ in the House of Mary and Martha (above, from 1580). Tintoretto knew what a hectic household looked like, being the eldest of 21 children. Again, Christ is off to the side, with the center occupied by the void between Christ and the two women of the title. Like the eye of a hurricane, that calm, still center holds together the swirling activity all around. Even the billowing drapery of the figures seems animated. A second male sits slightly back in the distance, unidentified, but serving the important role of completing the circuit of heads between Christ, Mary, and Martha. With such frenetic, kinetic energy, Tintoretto both pays homage to the animated vision of Michelangelo and points forward to the non-stop, action-packed art of the baroque. 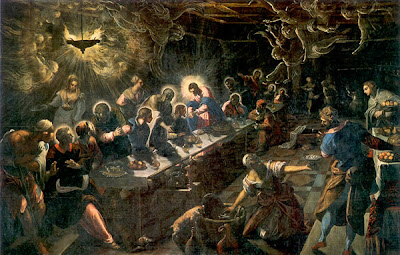 Nearly a century after Leonardo da Vinci painted his definitive The Last Supper, Tintoretto painted his version (above, from 1594). Whereas da Vinci paints with mathematical precision, focusing all eyes on the central figure of Christ and thus emphasizing the doctrinal truth of his central role in Christianity, Tintoretto approaches the subject from a wholly different vantage point. Christ remains at the center, but the supper table extends diagonally across the picture, diminishing Christ in some ways in relation to the Apostles seated at the end closer to the picture plane. Perhaps Tintoretto wanted to express a different doctrine—the importance of Christ’s followers in taking forward his message from that final meal together. Amazingly, as this human element literally juts out, clamoring for attention, a heavenly host attends the miracle, achieving a balance of sacred and profane that exemplifies the highest ideals of the Renaissance. Tintoretto certainly knew the past and was wise enough to see the future, painting both into his art.