Wearing Your Art on Your Sleeve 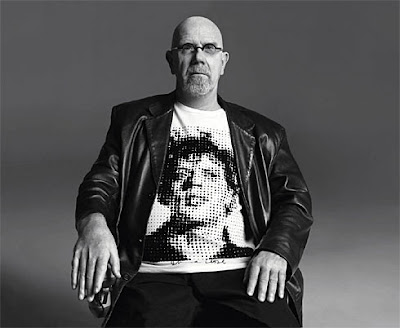 Combining art and merchandising for the masses, The Gap teams up with a star-studded lineup of artists to commemorate the Whitney Biennial. (Full press release here.) You can see the full lineup of shirts at The Gap site here. My favorite, which no longer seems to be available, is the offering by Chuck Close featuring his portrait of the composer Phillip Glass, modeled above by the artist himself. I love Glass’ music and Close’s unique style, so this is a match made in heaven for me. In addition to Close, the artists featured, all of whom once starred at past Whitney Biennials, are Jeff Koons, Marilyn Minter, Kiki Smith, Cai Guo-Qiang, Ashley Bickerton, Barbara Kruger, Kenny Scharf, Glenn Ligon, Rirkrit Tiravanija, Kerry James Marshall, Hanna Liden, and Sarah Sze. 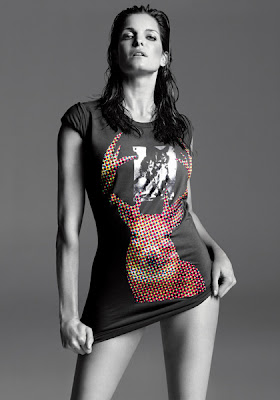 Gap added some edginess to their advertising by asking the artists themselves to model their work. Most agreed, allowing both art-loving and art-novice buyers to put a face with the name. Unfortunately, some artists chose not to model, such as Barbara Kruger and Jeff Koons (replaced by supermodel Stephanie Seymour above). As photogenic as the professional models are, seeing Close sitting almost Buddha-like in his wheelchair or Kiki Smith’s tresses flowing to the edges of the picture gives a personalized feel that cookie-cutter models just can’t match. The diversity of ethnicities and ages also reflects the art world much better, something I’m sure the Gap’s marketing department recognized, too. 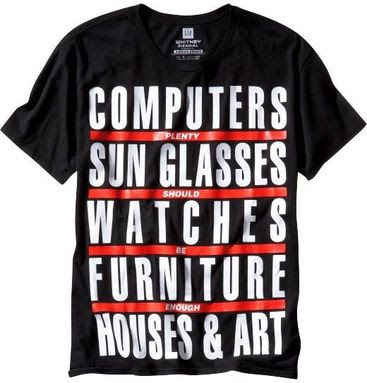 If nothing else, this campaign will get some great contemporary art out there in the mainstream consciousness, literally walking the streets. People may not know Barbara Kruger’s work by name, but when they see her shirt (above) coming at them on the sidewalks or in a mall, they may actually recognize the impact her style has had on recent American and French political imagery. It would have been nice to see the recently departed Robert Rauschenberg or the still-breathing Jasper Johns included in this list, but there’s only so many shirts they could market at once. If this promotion succeeds, there may be hope yet for modern art in the lives of average modern Americans, or at least those who shop at the Gap.