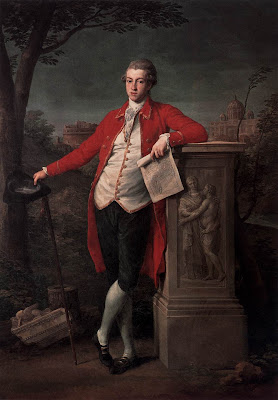 In the eighteenth century, anybody who was anyone took the Grand Tour, traipsing about Europe to see all the “glory that was Greece and the grandeur that was Rome.” The best way of capturing those memories pre-photography was to commission a portrait, and the best man for the job was Pompeo Batoni. A Knight in Rome: Charles Cecil Roberts (above, from 1778) shows one of Batoni’s satisfied customers in full regalia against a backdrop of classical props to ensure that everyone who saw it knew that the subject had made the trip and was now “cultured.” Born June 25, 1708, Batoni recently received a wonderful 300th birthday present from the National Gallery in London, whose exhibition may resurrect his once omnipresent reputation. While traveling in Rome in 1760, Benjamin West complained that Italian artists spoke of and imitated no one but Batoni. Starting out as a Rococo painter, Batoni soon embraced the lessons of classical art, helping usher in the age of Neoclassicism that fed the taste for the past whetted by the Grand Tour craze. 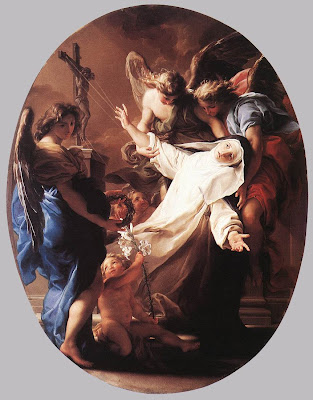 Batoni’s portraits won him his largest acclaim, but he began building his reputation with religious works such as The Ecstasy of St. Catherine of Siena (above, from 1743). By this time, Batoni already rejected the showiness of Rococo for a more controlled style aligned with the ancient Greek and Roman works recently rediscovered and studied by the first art historians, especially Johann Winckelmann, who became a friend of Batoni. Compare this ecstasy with the greatest ecstasy of the Baroque age—Giovanni Lorenzo Bernini’s Ecstasy of Saint Theresa. Side by side, Batoni’s work appears, well, less ecstatic and more controlled. The drama, energy, and tension remain, but Batoni turns the heat down to a low simmer where Bernini burns red hot. Swept up in the rationalizing wave of the Enlightenment, Batoni went with the flow and prioritized head over heart. 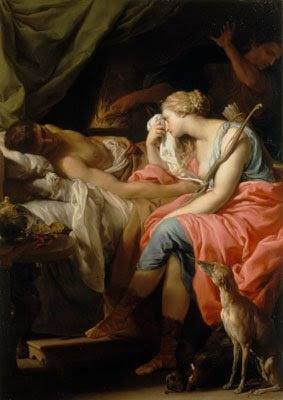 The same composure that Nicolas Poussin espoused in the seventeenth century, Batoni preached in the eighteenth. In turn, Batoni passed on the Neoclassical torch to Jacques-Louis David, to whom Batoni reportedly left his palette and brushes when he died. In works such as The Death of Meleager (above, from 1740-1743), Batoni made cool amazingly compelling. Reaching back into the mythology of Greece, Batoni shows Atalanta mourning for the dead Meleager. Batoni bleeds all the passion away, leaving the pathos of the two figures, accompanied by the strikingly attentive dog at the bottom right that steals the scene. Yet, this bloodless bloodletting remains compelling thanks to how wonderfully Batoni renders the different fabrics and actually creates a kind of movement in all the levels of darks and lights, making the body of Atalanta almost glow in contrast to the dimming light of Meleager. The pendulum of all art swings from hot to cool, from Dionysian to Apollonian, but Batoni made that pendulum swing to the cool, classical extreme as compellingly as any artist ever has.