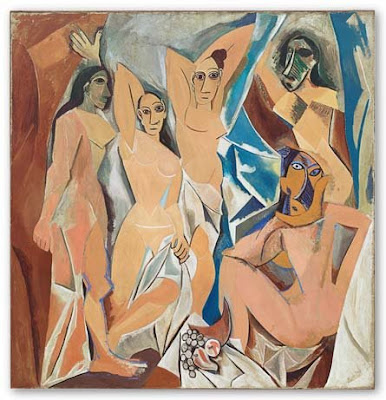 The MoMA opens today an exhibit celebrating the 100th anniversary of the creation of Pablo Picasso’s Les Demoiselles d’Avignon (above). The old girls still look great.

I’ve talked before about how underwhelming an experience it was to finally see the Mona Lisa in the flesh. Great art gets great hype, which can be tough to cut through to see a work afresh and truly appreciate it. Picasso’s Les Demoiselles lived up to the hype, at least for me.

The size of the painting, which is almost 8 feet wide by 8 feet tall, impressed me first. Reading the dimensions in a book next to a reproduction and trying to imagine what it would look like rarely prepares you for seeing the real thing in front of you. Picasso clearly wanted these women to be seen on a grand scale. Combined with their similar subject matter, this epic scale draws the clearest connections to the Large Bathers paintings of Paul Cezanne, both the version at the PMA and that at the Barnes Foundation. 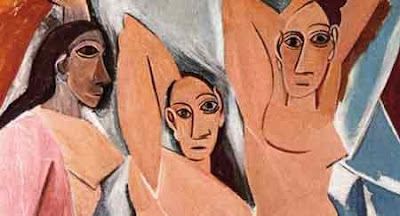 The content of the painting catalogues Picasso’s interests at the time. On the left (detail above), the stylized faces of the women are almost cubist in how he has broken them (as well as their bodies) up into flat planes. Picasso makes no attempt at realism. (The MoMA’s podcast of Les Demoiselles pointed out to me for the first time the strange nipplelessness of these females.) The faces resemble masks in their monotonous lifelessness, perhaps reflecting Picasso’s misogynistic view of the fungibility of women as he raced through mistress after mistress. 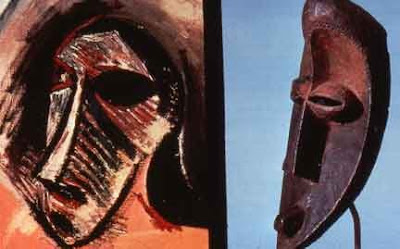 As you move across the painting from left to right, this monotony turns grotesque (detail above). The face of the woman sitting on the right appears to be a transitional stage, half human and half monster, but the face of the woman standing on the right completes the transformation to monstrosity. The image above shows the similarity between Picasso’s Demoiselle with the monstrous face and the African masks influencing his work at the time. Picasso incorporates African art into the work seamlessly, merging it with the Western concepts of cubism and Impressionism (via Cezanne) into something completely new. Les Demoiselles still delivers “the shock of the new” a century later.

Despite its disturbing imagery, Picasso’s Les Demoiselles remains one of the landmarks of modern art. It is the Mona of the MoMA and shouldn’t be missed on any visit there.

(UPDATE: Thomas Hoving, former director of the Metropolitan Museum of Art in New York shares his thoughts on Les Demoiselles’ centennial.)
Posted by Bob at 5:41 AM