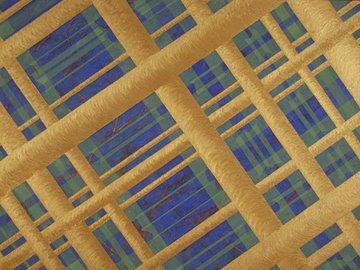 The Clark Gibson exhibit running now at the Bridgette Mayer Gallery in Olde City Philadelphia until May 26th rang a lot of art history bells for me when I stopped by. The apparent simplicity of Gibson’s approach belies a greater complexity within. Gibson’s City of Gold, my favorite from the exhibit, appears above.

“What would our surroundings look like, however, if we allowed the multitude of components in any given object to take visual predominance over the whole image?” Gibson asks in his artist’s statement on the Bridgette Mayer Gallery site. Once I saw the phrase “multitude of components,” I thought Cubism immediately. But instead of presenting different facets of three dimensions across two dimensions, subtracting a dimension, Gibson presents cross-section slices of design on top of each other, adding a fourth dimension of time to the image; hence, the show’s title “Time Frame.” The neutral colors of Picasso/Braque-style Cubism also give way to vibrant color schemes. This bold color palette generates a different vibratory rhythm, almost a Mondrian-like interplay of lines. (Some of the boxes formed by the intersecting lines echoed Mondrian’s Broadway Boogie Woogie for me.) Gibson adds yet another rhythm to the composition with his rounded brushstrokes on the solid planes of color. These brushstrokes catch and reshape light in a way that reproductions can’t duplicate. (In fact, the postcard from the show featuring Gibson’s Honeydew tries to duplicate this light effect, but it looks more like a printing error than the real thing.)

Gibson’s design background emerges clearly in the lattice-like design of the paintings, which each have four to six layers of paint piled on top of each other. I was drawn to City of Gold because it has not only this firm design grid, but also because Gibson added little flourishes of red within the design. These flourishes and the lattice effect made me think of Jackson Pollock’s work, specifically his Blue Poles (below).

Pollock’s Blue Poles inverts Gibson’s scheme in that the flourishes dominate over the design. However, the design is still unmistakably there in the eight near-vertical lines running from left to right. Gibson’s concentration on composition and design recovers this aspect of abstract art lost in the popular misconception of “Jack the Dripper” and other abstract artists. As I said before, Gibson’s paintings rang several art history bells for me, which is a good thing. The rhythm he creates shares riffs with some old masters, but in the end, the song is all his own.
Posted by Bob at 5:36 AM