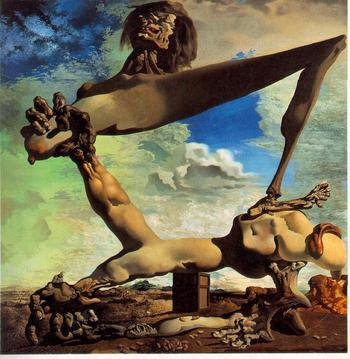 Surrealist showman and perhaps the greatest painter of the 20th century Salvador Dali was born on this date in 1904. Andre Breton created the anagram “Avida Dollars” from Dali’s name, which roughly means “Eager for Dollars,” to criticize the artist’s self-promotion at the expense of artistic integrity. George Orwell succinctly summed up the paradox of Dali: “One ought to be able to hold in one’s head simultaneously the two facts that Dali is a good draughtsman and a disgusting human being.”

Dali was one of my first art loves and remains one of my favorite painters. Only Picasso and jazz musician Miles Davis rival Dali in terms of the protean nature of his development. I remember going to the Dali exhibit at the PMA in 2005 and marveling at the first room of the exhibition showing his early work. Almost every painting style imaginable was there, classicism, realism, impressionism, cubism, proto-surrealism, as if Dali could do it all and only had to choose which path to take. It was at that moment that I realized that Dali may have been the greatest draughtsman since the Renaissance.

My main in-person experience of Dali before that exhibit came from the PMA’s own Soft Construction with Boiled Beans (Premonition of Civil War) (above). Painted in 1936, the surreal monster looming over the desolate landscape depicts perfectly the madness that Europe was poised to descend into. Only madness can speak of madness, and Dali’s surrealist approach now seems the only possible way of depicting that time (or any time of impending war, for that matter).

Despite Dali’s less appealing traits (his apparent anti-Semitism) and actions (his betrayal of filmmaker Luis Bunuel), the sense of fun and playfulness that Dali interjected into art and art history still makes me want to embrace him. Dali’s Ghost of Vermeer of Delft Which Can Be Used as a Table from 1934 (below) personifies this playful approach to the gods of art history, making even the venerated Vermeer seem silly and, thus, actually more human by transforming him into a piece of furniture. Through his relentless self-promotion and incredible talent to back it up, Dali brought serious modern art to mainstream culture in a way that few others did before and fewer have done since. 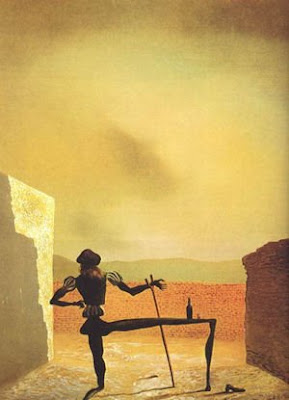 (BTW, the Virtual Dali site is a very cool place to delve into Dali further.)

(Also, BTW, the Dali exhibit at the PMA in 2005 sold my all-time favorite piece of museum gift shop kitsch—a dinner plate with Dali’s signature ants “running” across the surface! Perfect for picnics!)
Posted by Bob at 5:55 AM

Dali was also my first true art love. i discovered him not in a museum but in a book store. I was in highschool and working for $1.05 an hour at a movie theater. I had recently become a Christian and was pondering whether it was a good thing for me to continue my aspirations to be a painter or not. I stumbled across the big Dali book that looks like a gold box of chocolates in a mall book store. I cracked it open and by divine providence beheld the painting of St. John of the Cross. The painting moved me so deeply that I took it as a confimation to continue on my path to become an artist. I saved up enough money to buy the Dali book, my first art book, for $35.00 which was a lot of money back in 1971.

Thanks for sharing, Jim.

I love Dali's religious paintings, too. I've always thought of them as Modern Renaissance, especially St. John of the Cross. It's like Michelangelo meets Star Trek. "Beam me up!"

It's also good to know that I'm not the only one who remembers the particulars of buying a certain art book the way some people recall all the details of their first car.

No matter how bizarre the images, Dali's work shows solid academic training. He knew how to make the surreal appear real and memorable. And his paintings of Christ show a surprising gravitas of feeling. But to proclaim him the greatest of 20th century artists? Although he would undoubtedly agree, in all humility that title belongs jointly to Matisse and Picasso.

Dali had virtuoso skill and imagination, but his sense of form, that mystical essence of art, was not his strong point. But then it isn't in 98% of artists, living or dead. At least he had the fortitude not to imitate, which, as Ralph Waldo Emerson said, is suicide.

Please note that I used the qualifier "perhaps" when mentioning Dali as the greatest of the 20th century. I agree that Matisse and Picasso rank right up there. I try on this blog to avoid outright superlatives, but I'm sure I slip up now and again, mostly from enthusiasm about what I'm thinking and writing about at the time. The great thing about those "greatest" arguments, at least for me, is that the list of contenders always changes with my mood. I like to think of it as personal growth rather than fickleness.

And thanks for the Emerson's quote on imitation, which I didn't know.