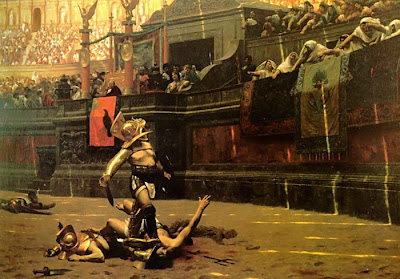 Painter of grand history and exotic locales Jean-Leon Gerome was born on this date in 1824. Gerome, one of the most widely acclaimed international painters and sculptors of his time, also taught such masters as Thomas Eakins, Odilon Redon, and J. Alden Weir in his Paris atelier. A collection of 164 of Gerome’s works can be found here. 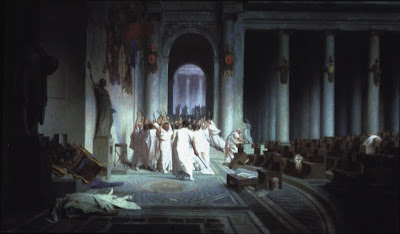 After even just a quick look at the list of paintings in Gerome’s oeuvre, two themes stand out: paintings recreating great moments in history and/or epic scenes of exotic places, quite often with a Middle Eastern flavor. Pollice Verso (Latin for “thumbs down”), at the top of this post, may have inspired all of the modern misconceptions of the gladiators of Ancient Rome, particularly whether the death sentence was signaled by thumbs up or down. Most experts believe death was approved by thumbs up, but Gerome’s misdirected thumbs have been embedded in the popular imagination since the 19th century. Another great history painting above shows the Roman senators (including “Et tu?” Brutus) closing in at The Death of Caesar.

Gerome’s travels to Turkey and Egypt provided material for scores of paintings, such as the beautiful The Pyramids, Sunrise above. Such exotic works captured the imagination of 19th century Europe. Unfortunately, with the rise of Impressionism, the taste for Gerome’s exotic brand of Romantic realism decreased and his international reputation suffered.

I know Gerome best as the teacher of Eakins. Eakins sent a watercolor version of one of his rowing pictures to Gerome years after leaving his atelier, still seeking his maestro’s approval. Seeing Gerome’s paintings at the Musee D’Orsay brought back to me all those memories of Eakins’ affection and respect. Eakins own success as a teacher may be tied to the example of Gerome.