Of Brotherhoods and Blessed Damozels 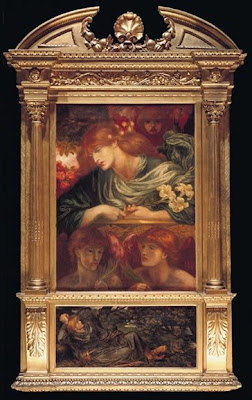 The blessed damozel lean'd out
From the gold bar of Heaven;
Her eyes were deeper than the depth
Of waters still'd at even;
She had three lilies in her hand,
And the stars in her hair were seven.

Dante Gabriel Rossetti, founder of the Pre-Raphaelite Brotherhood and perhaps England’s finest painter-poet since William Blake, turned 179 on Saturday, May 12th. An excerpt from his widely anthologized poem The Blessed Damozel appears above, along with the painting of the same name he made years later.

Along with William Holman Hunt and John Everett Millais, Rossetti began the Pre-Raphaelite Brotherhood in 1848 as a way to escape the influence of the heavy hitters of the Renaissance (Raphael, Michelangelo, and da Vinci) and discover a simpler, more Medieval, and less Mannerist style based on painting from nature while deriving much of their subject matter from literature, especially the work of the Romantic poets and Shakespeare. 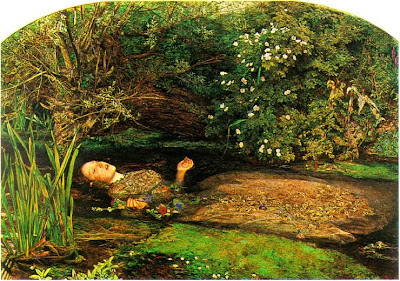 One of these Shakespeare-inspired works, Millais’ Ophelia (above), shows Elizabeth Siddal, who became Rossetti’s wife. When Siddal died in 1862 from an overdose of laudanum, Rossetti foreswore writing poetry ever again and even buried a manuscript of poems with his late wife. Personal problems drove Rossetti to take up poetry again and he exhumed his wife’s body to recover his lost poems in 1869—perhaps the most macabre episode in Romantic literature that I can think of, including the exploits of Byron and Shelley.

Rossetti helped revive William Blake’s artistic and literary reputations in the 1860s by being involved in the preparation of Alexander Gilchrist’s Life of Blake, the first true study of the poet-painter, after Gilchrist’s death. The visionary aspect of Blake’s work clearly influenced the otherworldly, Romantic nature of Rossetti’s painting and poetry.

Much of Rossetti’s poetry is very dated, but he has several interesting poems on such paintings as da Vinci’s Virgin of the Rocks, Botticelli’s Primavera , and “Michelangelo’s” The Holy Family (no longer attributed to Michelangelo). I remember loving Rossetti’s poetry when I was in high school, caught up in all the romanticism of the ladies and heroes—a young man’s idea of what poetry should ideally be. However, his paintings and all those of the Pre-Raphaelite school continue to catch my eye and entertain.

(BTW, The Rossetti Archive hopes to collect all things Rossetti by 2008. You can find all of his poems on the paintings I discuss there. Especially interesting are the links between some of his poems and his paintings that came from that same spark of inspiration.)
Posted by Bob at 5:39 AM