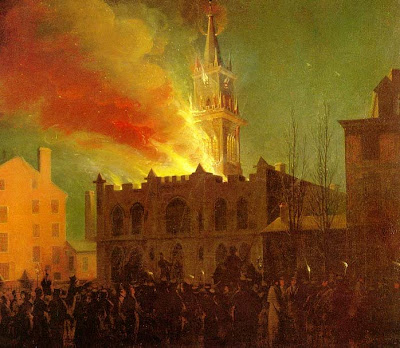 John Lewis Krimmel, born Johann Ludwig Krimmel on this date in 1786, recorded life in his adopted country of colonial America and earned the nickname of “The American Hogarth.” His dramatic Conflagration of the Masonic Hall, Chestnut Street, Philadelphia, Pennsylvania 1819 appears above. (Other paintings by Krimmel appear here. ) 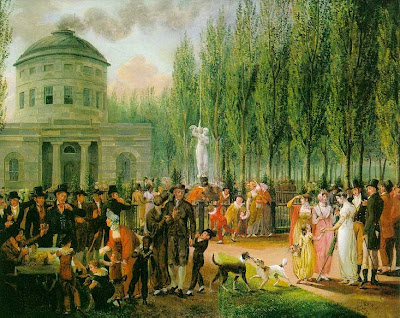 Much of what we know about how life appeared in colonial times comes from Krimmel’s images. Above, Krimmel captures the celebrations of the Fourth of July in Center Square in 1812 in Philadelphia. Each time I see this painting at the PAFA, my eyes go directly to William Rush ’s Water Nymph and Bittern, the white statue in the rear of a classically attired woman holding a bird on her shoulder. Thomas Eakins immortalized this statue in a series of paintings imagining the scene where Rush carved the statue before his nude model. My eyes then go to the left-hand side of the picture, where the revelers are lining up for drinks. 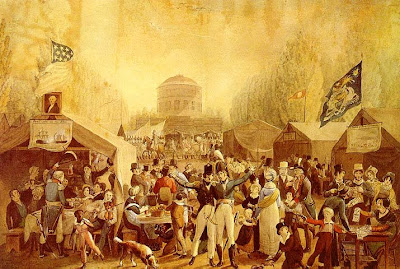 Krimmel shows the 1819 version of Fourth of July celebrations in this image above. This celebration takes place in Center Square as well. The circular building at the center of both paintings is the same, except from different angles over the space of seven years. The prevalence of military costume among the partygoers reflects the increased military consciousness of the young country, fresh off of the War of 1812 and just gearing up for the Indian Wars spearheading the drive of Manifest Destiny across the continent. 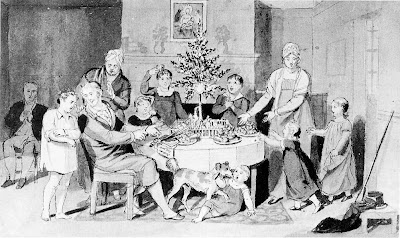 I find Krimmel’s nickname “The American Hogarth” to be a little deceiving. Hogarth’s work featured a narrative power and satirical bent, where Krimmel painted in a gentler, more documentary style. The Christmas image above from the 1810s shows a typical German-style Christmas, which he would have been very familiar with, complete with tiny tree on a table and gifts piled on plates. Such a Christmas celebration was atypical for non-German Americans at that time, giving us a glimpse at a world and a time very different from our own. 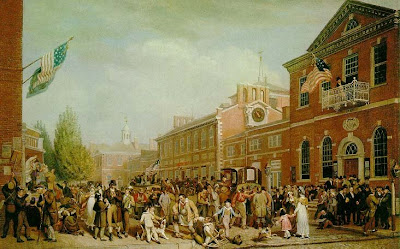 Sadly, Krimmel died in a swimming accident in 1821 at the age of 34. How many more images of early America, such as the Election Scene, State House in Philadelphia 1815 (above), which shows what we know today as Independence Hall in the background, could he have passed down to us?
Posted by Bob at 6:03 AM