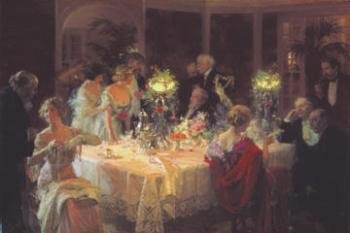 One of the great joys of writing this blog is discovering new artists. Today, I offer to you a lost master, Jules Alexander Grun, born on May 26, 1868. Once considered on a par with Henri de Toulouse-Lautrec in terms of graphic art in late 19th/early 20th century France, Grun is almost forgotten today. His painting Fin de Souper appears above.

Little is know about Grun’s life. In fact, Grun’s unassuming nature lives on today in the hidden self portraits he placed in several of his paintings. (Go here for help in finding Grun in Fin de Souper above.) 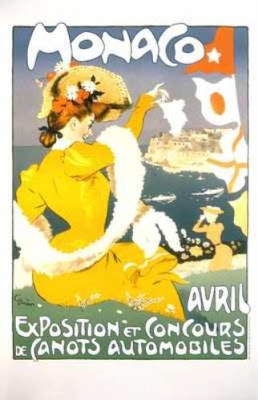 Fortunately, Grun’s ability to create stunning posters could never be hidden. His Monaco Canots Automobiles poster above still shines with the stunning flat area of yellow of the woman’s dress. These flat planes and the positioning of the woman along the side of the image show the influence of Japanese art on Grun, part of the general Japonisme influence on French art at the time. 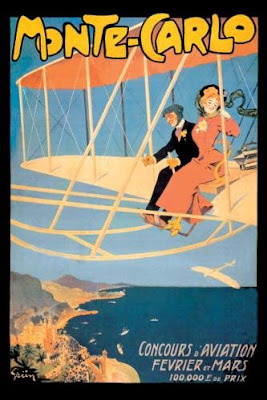 A Japanese influence also emerges in the strong diagonals of the Monte-Carlo Concours d’Aviation poster above. The line of the plane’s wing stretching off into space echoes similar lines in Japanese prints, while the opposing diagonals of the plane’s rigging and landing gear create a counterpoint effect solely of Grun’s own invention. The stunning color palette, from the bold blue sky to the woman’s fiery red dress, speaks of the new freedom of the Impressionists and Post-Impressionists that surrounded (and overshadowed) Grun.

Amazingly, even the year of Grun’s death is in question, sometime in the 1930s or 1940s, after a battle with Parkinson’s Disease. Almost as silent in life as in the grave, Grun may one day find someone to give his great paintings a voice.
Posted by Bob at 5:52 AM

these are great--thank you! i didn't know about him