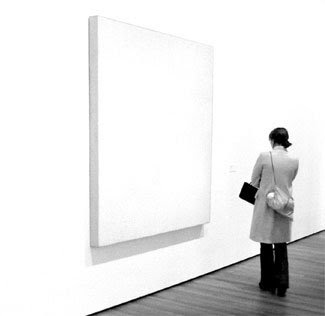 When people who don’t know much about modern art point towards something and say “I can do that,” what they’re most likely pointing at is something either painted or influenced by Robert Ryman, infamous father of minimalist painting’s all-white works, such as the one seemingly befuddling a patron in the image above.

Ryman’s career in the visual arts began as a museum guard at the MOMA. His first major work was a single-color abstraction called Orange Painting, not much different than the single-color International Klein Blue works of Yves Klein, of course. But whereas Klein tried to engage the viewer with saturated fields of color, Ryman moved away from color and tried to find expression in nuance and minimal gesture. 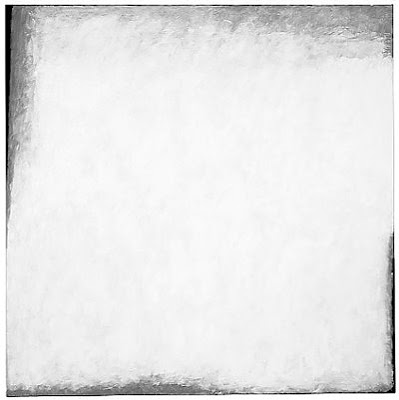 Ryman’s Series #9 (White) appears above. Ryman’s mimimalism is so minimal that reproductions usually appear to be completely white. I chose the photo of the patron looking at a Ryman painting at the top specifically to avoid leading off with an apparently empty box. Series #9 (White), however, does have enough variance, especially in the receding corners and in the visible texture of the center, to give us something to hold on to intellectually. It’s this frustrating nature of his works that, unfortunately, has brought him scorn in mainstream culture.

Ryman’s influence is still felt today, however, in artists such as Quentin Morris, who bases his minimalism in black rather than white to explore African-American culture within the context of society as a whole. I don’t see any corresponding racial aspect in Ryman’s work, but that’s the strength of his minimalism—it allows each viewer to engage the work and discover something already within him or herself. Unfortunately, as much as critics such as Kirk Varnedoe try to defend these “pictures of nothing,” they will always remain exactly that for many people.
Posted by Bob at 6:14 AM