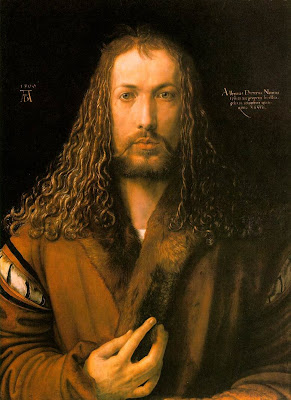 Albrecht Durer, the founding father of German art, entered the world on May 21, 1471. The image above of Durer, the Self Portrait in Fur Coat of 1500, shows the artist at 28 years of age. This image became an icon for those who wished to become an artist, German and otherwise. When artists such as Gustav Klimt would don robes to play the role of an artist, they were really trying to be Durer. 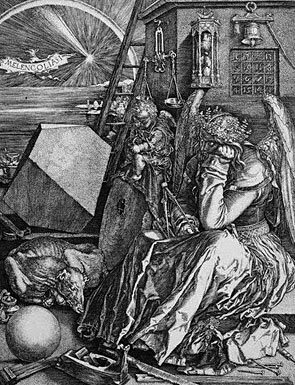 For me, Durer has always remained one of those love at first sight artists, along with Michelangelo, Eakins, and Dali. The immediacy of his work is inescapable. What makes that immediacy even more amazing is the ability to continue to go back to these works and find even greater and greater depth, something true of most great art. As a melancholy teen, I remember seeing Durer’s 1514 engraving Melencolia I (above) and identifying with the fantastic representation of such real emotion. Going back to it years later, I learned more about the magic square, rhombohedron, and other mathematical tricks plucked from Durer’s vast knowledge of math and geometry. I don’t claim to fully understand them (I was an English major), but I can still stand in awe of the range of Durer’s knowledge coupled with his talent to express it. Such unions of math and art became rarer and rarer after the Renaissance, with the exception of artists such as Eakins, whose main mathematical concerns regarded perspective. 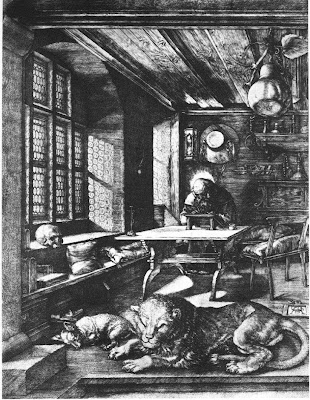 Another iconic image of Durer’s that always spoke to me is his Saint Jerome in His Study (above) . St. Jerome is the Catholic patron saint of scholars, students, and librarians. As a Irish Catholic with pretensions to scholarship, many a time I’ve asked for his intercession over a troubling text. St. Jerome’s furrowed brow always encouraged my studies with the thought that even saints sometimes got stuck.

Durer’s work teems with life and imagination. There is always a sense of something coming over the brim, flowing beyond all control, like his rock star hair in his self portrait. In the days of Durer’s youth, it was a custom in Germany to take a year off and wander (the wanderjahre) after finishing your apprenticeship to travel, see the world, and find yourself. Durer went walking and kept walking for an extra three years! Durer left some autobiographical writings about his travels, but the real testament to those travels and their ultimate outcome—the potential he found in himself and how to express it fully—can be found in his art.
Posted by Bob at 6:08 AM