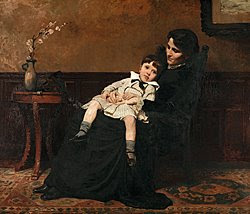 Les Derniers Jours d'Enfance (shown above), which was featured in the recent exhibit Americans in Paris: 1860-1900 at the Metropolitan Museum of Art in New York, is the work of Cecilia Beaux, born on this date in 1855. Beaux remains one of the finest 19th century women artists to have studied at the PAFA, which still owns a large collection of her work.

Beaux studied under Thomas Eakins at the PAFA in the 1870s. Although Beaux disliked Eakins' teaching and painting methods, the precision and warm coloring of her portraits clearly show his influence. However, as can be seen in some of her landscapes and in the handling of fabrics in her portraits, John Singer Sargent also comes across as an influence. James McNeill Whistler’s Arrangement in Gray and Black: Portrait of the Artist's Mother (better known as Whistler’s Mother), as the Americans in Paris: 1860-1900 documentation points out, appeared at the PAFA when Beaux studied there and may have influenced the composition of her painting above.

This painting, the title of which means “the last days of infancy,” strikes me as a combination of all these influences to such a degree that it’s hard to see Beaux’s artistic individuality. Beaux’s almost contemporary Mary Cassatt studied at the PAFA a decade before her, but Cassatt’s ownership of this genre of mother and child images makes it impossible for me to disconnect these two women artists, further piling on the levels of influence on Beaux’s work. Beaux also traveled to Paris and saw the Impressionists' early work, which contrasted and softened her rigorous figurative training at the PAFA.

Walking through art galleries always provides fun opportunities to play “who’s influencing who,” but the incestuous nature of the PAFA, where such powerful visionaries as Eakins taught and artists such as Sargent and Whistler were known by reputation if not by exhibits, makes the game almost too easy and sometimes detrimental to the artwork. I fear that I’ve been too spoiled by acknowledged first-tier artists to see Cecilia Beaux as anything more than a second-tier, albeit still excellent portraitist, and I’m not sure that such an appraisal is completely fair. Sometimes knowing too much is worse than not knowing anything at all when it comes to looking at art.
Posted by Bob at 6:09 AM