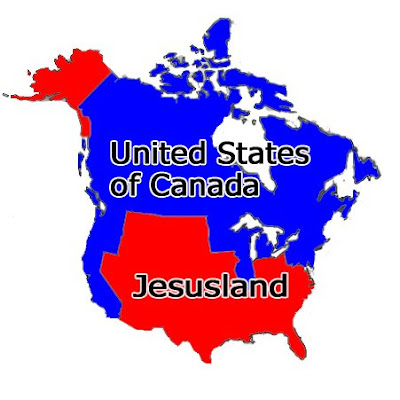 Francesca Gavin over at the Guardian’s Art Blogs examines “How Art Replaced Religion.” “Has art become a modern cult?” she asks, adding “In this highly secular society, spiritual expression and religious ritual are waning.” Gavin goes on to draw amusing and enlightening parallels between the old gods and the new one of art. But what popped out at me, viewing things from the opposite side of the Atlantic, was her phrase “highly secular society,” which may be true over there, but definitely not here in what many unaffectionately call “Jesusland” (map above). Nonetheless, Gavin’s main question still rankles: have the arts, in the absence of a religion that speaks to the modern condition, replaced God?

I’d like to think that Americans are lining up at libraries and museums seeking spiritual fulfillment, but that would be naïve. And what too often passes for “God” in America is simply window dressing for ignorance and hate. If God is dead in America, to paraphrase Nietzsche, it is television that has killed him. We’ve become a soulless culture in no small way because of a soulless little box’s ability to feed the worst prejudices and fears within our society, which become larger and larger to the exclusion of all reason. From game shows to televangelists, the visual art most often experienced by Americans is nothing more than a commercialized lobotomy. There are some good shows on TV, of course, but they are lost in the deluge of the trite, the misinformative, and the downright inflammatory.

I believe that people have an innate need to believe in something. We fashion the gods we need from the resources on hand. Unfortunately, to paraphrase Donald Rumsfeld, sometimes you need to believe in the God you have, not the God you want. Too many Americans accept the God they have, but the God we “want” should be the God of Art, of Gentleness, of Love, and all that other good stuff—all resources on hand within us but much too long ignored.

The short time I spent in London with my wife a few years ago made me wish I could stay there forever. A historically mindful, mostly liberal, English-speaking culture? Sign me up! I know most Brits can easily poke holes in my idealistic, touristy view, but I still feel that a grain of truth would remain somewhere beneath. I just can’t imagine Americans getting as excited over an art contest as the British do over The Turner Prize. If art has replaced religion in England, I hope someone’s looking at making it the next British Invasion of the States.
Posted by Bob at 12:10 PM