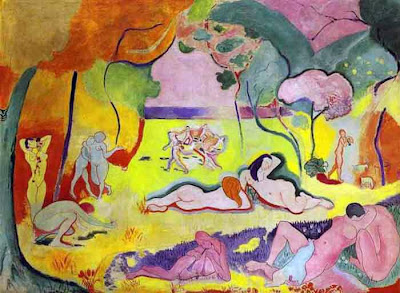 I’ve been participating on the PMA’s member community message board for a while now. (You need a PMA member account to log on.) On the whole, it’s a rather dead expanse, but “Wm.” recently livened things up by beginning a thread on the move of the Barnes Foundation artworks to the Parkway in Philadelphia and then not liking what he heard. (Above is Matisse’s Joy of Life from the Barnes collection.) Below is Wm.’s response to my enthusiasm over the move and, below that, my response to him. (I’ve put some explanatory notes in bold and brackets.)

Here’s Wm.:
In my view, the proposal to move the art collection of Dr. Albert and Laura Barnes to a downtown location represents the greatest art theft in world history. Even the British didn’t manage to pull off so glibly such a crime even when robbing the middle east of its treasures.

It astounds me that this robbery is occurring in broad daylight with almost no public comment except the rather indifferent exchange we see between Bob {That’s ME!--Bob} and Brian {A third party on the thread who has remained silent so far. --Bob}. The press ignores what is being done by the city’s fathers as if in complicity.
Ed Rendell is financing the majority of the proposed move as a political favor to Philadelphia’s financial backers of his political campaigns; Philadelphia’s museum industry succeeded in infiltrating and discrediting the Barnes trustees rendering them hypnotized and helpless in protecting Dr. Barnes’ treasures; there has been a long running and lively conspiracy between the city and it’s elite on museum row to steal the Barnes’ collection going back to Dr. Barnes’ time.
Dr. Barnes knew about this conspiracy and attempted to protect his collection and museum from these lustfully acquisitive people. Dr. Barnes’ effort appears to be failing because of the weight of money and political manipulation against him, and the malfeasance of the people he trusted to govern his affairs after his death -- So much for trusting your trustees!!
What this proves is that nothing that anyone has within range of Philadelphia’s moneyed elite is safe. If the moneyed elite want what you have to self-aggrandize their museums, then the moneyed elite will subvert justice, overturn estates, ignore personal wishes and pick even the locks on your doors to grab what they want.
I can imagine that Museum Row will soon require inventories of our personal holdings in art and artifacts, mandating these things to themselves regardless of our wishes, even prying our rigor mortised fingers off the objects of their rapaciousness.
Please, enough of the blather of Brian and Bob {ME! Again! --Bob}. It is enough to strangle me. Please, someone speak of consequence. {Now that hurt… --Bob}
Does anyone out there really believe that Philadelphia has the right to commandeer the art collection of Dr. and Laura Barnes, gut the garden environment that houses it, and move the whole thing to downtown Philadelphia to be exhibited in a faux-museum, devoid of its contextual environment where it was arranged as an organic whole, and set the whole thing up on museum row, as if the paintings, ripped from their context, were cheap reproductions on black velvet being marketed to bus loads of acquisitive tourists?
I’m not holding my breath.

At the risk of blathering further and giving Wm. the vapors, I would like to respond to his points below.

First, I thank him for injecting some life into this discussion board, however uncivil and uninformed.

Now, the move of the Barnes collection to the Parkway in Philadelphia is neither a theft nor a conspiracy. This is not the Elgin Marbles leaving Greece for England. This is a collection of art moving 10 minutes drive time away to a location with more public transportation and parking. Not only will the collection be more accessible, but it will also be better conserved, thanks to the greater income from the increased patronage. Anyone who truly loves these paintings will appreciate their increased visibility and preservation at the minor cost of 10 minutes driving, even at today’s gas prices.

The Mellon Foundation just gave $5 million to the Barnes for “scholarly activity,” which is perhaps the first of many fringe benefits of the move. I blogged about this just yesterday, by the way. The dearth of scholarly works on the Barnes collection is a wrong that will soon be righted by this gift.

Wm. seems to suffer from the myth of Dr. Albert C. Barnes, which I boil down to words versus actions. Following the philosophy of John Dewey, Barnes nobly dedicated much of his riches to creating a museum of great art to educate the public, placing faith in Dewey’s idea that culture would create better citizens and, therefore, a better society. Barnes also enlisted the help of William Glackens, an artist, to point out cutting edge artists such as Renoir and Matisse and help create a collection.

Unfortunately, Barnes actions got in the way of his words. Barnes soon promoted himself and not Glackens as the “discoverer” of the artists in his museum. When poor workers came in to the foundation to interact with the art and ungratefully had thoughts and desires not involving the aggrandizement of Barnes’ ego, he decided that Dewey’s ideals were better in the abstract than in practice, and thus closed off access to his artwork through a baroque labyrinth of rules and regulations that stand to this day.

Please forgive me if I don’t see Dr. and Laura Barnes as heroes.

Also, the whole idea of a new location as a “faux” museum is ludicrous. By Wm.’s definition, all museums are fakes. Did the Greeks conveniently leave a temple at the outskirts of Philadelphia for William Penn to find and turn into the PMA? Did Barnes plant a seed and grow his “organic whole” out of the earth?

I don’t want to get personal, but I will. I sense a Barnesian distaste for the public at large in Wm.’s envenomed phrase “bus loads of acquisitive tourists.” Combining your archaic use of “Wm.” for “William,” your distaste for Ed Rendell, and your misplaced sense of victimization as shown in your fear of “Philadelphia’s moneyed elite” coming for “personal holdings” of artworks, I’m going to profile you as an elderly, wealthy, Republican, white male wondering how all this messy democracy can be stopped, like pushing toothpaste back into the tube.

I’m picturing you, Wm., as a Main Line Ted Stevens (R-Alaska), finally realizing that the internet isn’t a truck but still stuck on the idea that it’s a series of tubes. That picture may explain your lack of civility on this board, but doesn’t excuse your overall disdain for those who disagree with you or those who would enjoy the Barnes collection at the “expense” of your private enjoyment. The internet and the new Barnes on the Parkway are realities that you’ll either have to come to terms with or not. So sorry if democracy is too messy for you, but for the rest of us, like the Barnes collection, it’s a beautiful thing.