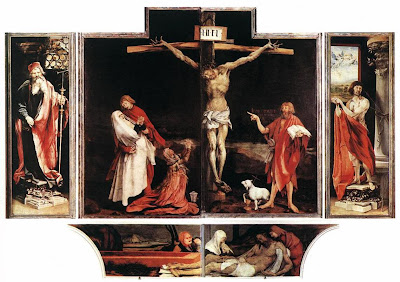 Comparing his Christ of Saint John of the Cross to Matthias Grunewald’s The Isenheim Altarpiece, Salvador Dali announced, “I want to paint a Christ that is the absolute opposite of Grunewald’s materialistic savagely anti-mystical one.” Whereas Dali’s Christ is cosmic universality, Grunewald’s is earthly specificity. Where Dali is wrong is in thinking that there isn’t a place for both.

Grunewald’s altarpiece is the most visceral presentation of the physical pain of Christ I have ever seen. Christ seems to be decomposing on the cross. There is seemingly nothing redeeming about the pain and suffering represented. This altarpiece was designed for a monastery whose monks specialized in taking care of people with horrible skin diseases, so the level of grotesqueness they experienced every day was reflected by the main object of their worship. But just when all hope seemed lost, the door sof the altarpiece could be closed and the vision of the Resurrection appears (below). 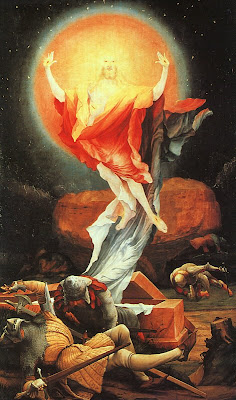 As with Hunt’s painting The Light of the World, Christ illuminates the world with the light of his redeeming truth, bringing hope into the darkest corners of the world. This is the end of suffering, he is saying to those who believe. There is an end, and it is I.

It is in this message of hope that Grunewald’s altarpiece serves all humanity, regardless of your specific faith (or lack of). Here is what Joseph Campbell called The Power of Myth to lift everyday life out of itself and imbue it with meaning. Christ provides one of the faces of The Hero with a Thousand Faces, playing out the role of the “monomyth,” i.e., the journey of the hero, that each of us must also play.

The pradella, or lower piece of the altarpiece, shows Christ being lowered into his tomb. Grunewald takes this image one step further by placing Christ off to the side, where the separation of the panels gives the illusion of Christ’s legs being amputated, a very real possibility for the patients who would be worshiping before it. In taking this imaginative liberty, Grunewald remains faithful to the Biblical story written long ago while also remaining faithful to the human beings right there in the 16th century. This is a Christ who suffers as we suffer, Grunewald says, not just on a cross long ago but at the end of a surgeon’s saw right now.

Dali’s cosmic Christ was the right Christ for his time, but Grunewald’s Christ of the earth, journeying and suffering alongside those most in need of a friend, a hero, was right for his time as well, and perhaps for ours today. The biggest lesson I’ve learned from this series is that each of these images has something to offer us, regardless of time, place, or creed.

Happy Easter and a solemn Passover to all who believe. Peace to all others.
Posted by Bob at 5:44 AM