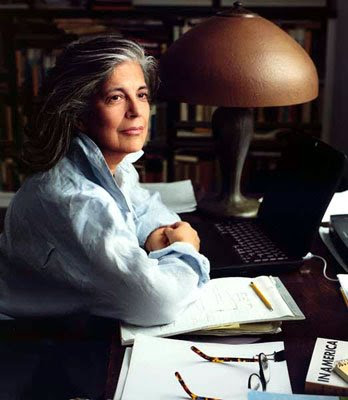 I just got a chance to go through the companion book to the Annie Leibovitz: A Photographer’s Life 1990-2005 exhibit that appeared earlier this year at the Brooklyn Museum. For those who know her only for the shallow celebrity work she’s done for Rolling Stone, this collection will surprise.

Leibovitz’s shallow celebrities are there, of course. Scarlet Johansson, Brad Pitt, Leonardo DiCaprio, and Nicole Kidman seem even more plastic in well-lit, well-composed, still photography than they do in motion pictures. But there are some intriguing celebrity photos as well. Sylvester Stallone’s torso (circa 1993) in all its grotesque muscularity and popping veins almost doubles for antique statuary. A young, topless Cindy Crawford entices as a believable Eve, complete with snake. Chris Rock turns the racial tables by appearing in whiteface. Even the notorious pregnant Demi Moore nude for the cover of Vanity Fair seems now more like a modern madonna (no, not that Madonna).

However, all these images pale before the photographs of Susan Sontag, Leibovitz’s companion during the span covered by the book until Sontag’s death in December 2004 (a photo of Sontag by Leibovitz is above). Photo series of Sontag sitting in a car, laying on a bed, nude in a tub, and dwarfed by the rocky entranceway to Petra give way over time to her battle with cancer, culminating in series of images of her laying in a hospital bed and finally in her open casket. Sontag’s trademark white streak in her raven hair grows to envelop all of her hair as her cancer takes hold. Leibovitz beautifully documents Sontag’s struggle with an undying love and unerring eye. Perhaps the most poignant images of Sontag are those showing only the notes on her desk for The Volcano Lover, a precursor to the absence that would be felt after her wonderful, opinionated voice went silent.

Leibovitz also captures the spirit of some of her fellow artists: Cindy Sherman, Chuck Close, Brice Marden, Matthew Barney, Julian Schnabel, and even photographs the shadow of Jasper Johns. Her photos of the Guggenheim Museum in Bilbao, Spain follow each maddening, shimmering curve of Frank Gehry's design. Leibovitz even photographs herself in a mirror nude and pregnant.

The imagination can’t help but be pulled in by Leibovitz’s often stirring photographs. A Nighthawk stealth fighter seems to pass by a church steeple, both solid black silhouettes against a slate grey sky, swift movement echoing stationary stone. A golden panorama of the Nile River celebrates Sontag’s 60th birthday. A bicycle fallen to the ground in Sarajevo in 1994 acts like punctuation at the end of long bloody swirls, asking where the rider has gone (image here, scroll down). A disturbing unsmiling portrait of the Bush cabinet from December 2001, with only Cheney and Powell even coming close to a sneer and Bush himself suppressing a smirk, recalls the days shortly after September 11th and emblemizes the days since.

Leibovitz’s body of work deserves a new appraisal if for nothing else than her devotion to Susan Sontag and the honesty of how she presents Sontag’s final battle, a love story to the end.
Posted by Bob at 5:58 AM