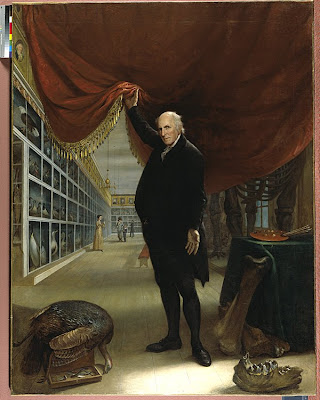 Peale fought in the American Revolution, rising to the rank of captain. Many of the iconic portraits of generals from the revolution and the “Founding Fathers,” such as George Washington and Benjamin Franklin, were done by Peale, capturing their likenesses for posterity. The Second Bank of the United States gallery run by the National Parks Service (free admission) in Olde City Philadelphia now houses many of these portraits. It’s truly amazing to see such historic faces all gathered together in one place. Peale’s portrait of Washington at Princeton sold for $21.3 million USD in 2005, a record for an American portrait.

Peale also founded the first artists association in America, “The Columbianum,” in 1794. In 1805, Peale and other artists joined together to found the PAFA, the first museum dedicated to the advancement of American art. Peale’s Museum, founded in 1786 (and pictured in the portrait above), established naturalist studies in America. (Unfortunately, the mastodon in the portrait, one of the first unearthed, was assembled incorrectly due to the early stage of dinosaur studies at that time.)

However, Peale’s greatest achievement may have been in founding the first art dynasty in America. After naming many of his 10 children after his favorite artists (Rembrandt, Raphaelle, Rubens, and Titian), Peale taught all of this sons and daughters how to paint. Rembrandt Peale eventually emerged as the best of the second generation, but the room at the PAFA filled with the Peale family’s work reveals the strengths of all their work and testifies to the Peale's teaching gifts.

My second favorite painting by Peale is The Staircase Group (shown above) at the PMA, which shows Raphaelle and Titian climbing a staircase and even has a real step attached to the bottom of the frame. Legend has it that the lifelike painting fooled George Washington when he came to visit Peale so well that Washington bowed to it. I’ve always believed that The Staircase Group and its legend best encapsulate the core values of Peale’s life: country, family, art.
Posted by Bob at 5:01 AM