The Art of Eating, The Eating of Art 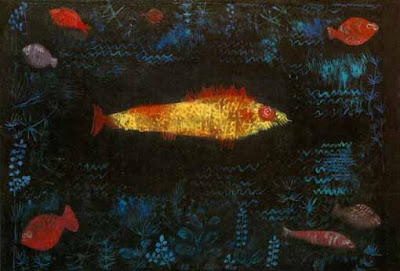 There is a new restaurant in New York City named Klee, after the great Swiss artist Paul Klee. (Klee's The Golden Fish from 1925 is above.)
In the press for the restaurant, they claim that Klee's playful approach to art inspires the head chef to be equally playful and creative in his cooking. As much as I agree with the characterization of Klee's playfulness, I did a double take when I first saw the name of the restaurant featured in the April 9, 2007 issue of The New Yorker. I've read of Klee's influence on Alfred Hitchcock (who was a collector of Klee and other artists, and even worked with Salvador Dali on Spellbound), but have never before seen anything regarding the culinary arts.
Maybe Modern Art will be the next secret ingredient on Iron Chef.