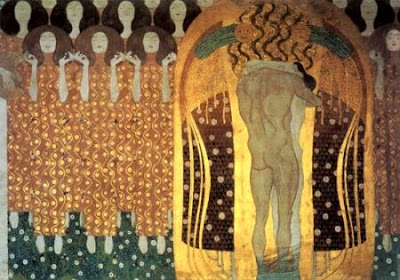 Today is the 110th anniversary of the Vienna Secession, one of my favorite groups of artists, which includes Gustav Klimt, Oskar Kokoschka, and Egon Schiele. In 1897, this group of artists declared independence from the conservatism and historicism of the larger Viennese art world and began exhibiting on their own. The Secession building in Vienna still stands and houses many of the works the group exhibited, including Klimt’s Beethoven Frieze, part of which is shown above. The 14th Secessionist exhibition was dedicated to Ludwig von Beethoven, who they saw as representing the height of artistic integrity. Although the group fell apart in 1905 with Klimt’s departure, their influence stylistically was felt for many years in modernist art. Nazi Germany banned many of these artists as “degenerate” despite their contribution to German art. Today, they continue to have great value, as shown by the inclusion of Klimt and Schiele on the top ten list of total art sales in 2006.

Personally, I’ve always loved Klimt and this art style for its freedom of expression and pure inventiveness. The beautiful turbulence of Kokoschka’s work puts him near the top of my list of nearly forgotten great artists. (Kokoschka’s connection to Alma Mahler, widow of Gustav Mahler, one of my favorite composers, also earns him a special place in my heart.) The brutal honesty of Schiele’s drawings and watercolors helps rank them among some of the finest nudes in modern art.