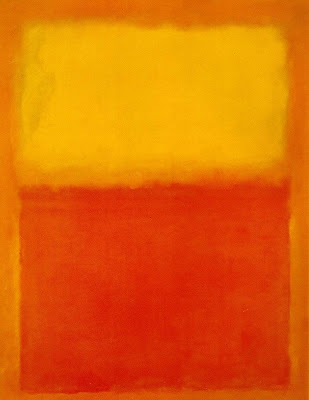 I just wanted to echo Richard Lacayo’s thoughts on the ability of modern abstract art to help us imaginatively cope with tragedies such as the Virginia Tech murders last week. I hesitated writing anything last week about the incident, because I felt that only time could provide perspective to such monumental senselessness.

Lacayo chose one of Mark Rothko’s somber red and black paintings in his post, but I’ve chosen Rothko’s Orange and Yellow from 1956 to show Rothko’s more hopeful side, often forgotten due to his tragic suicide.

To me, Rothko’s paintings, regardless of their colors, represent the transitory nature of art and life better than any other modern art. Because Rothko used army surplus canvas and cheap house paints for many of his works, they are degrading faster than normal works of the same age. Visit any Rothko painting in a museum and sneak a peek along the side. You’ll most likely see the canvas coming apart at the edges, starting from the rear and sides. The paints themselves have lost their color fidelity, changing into something Rothko did not intend, usually growing darker and more somber, as if the paintings themselves grieve over the passage of time and their own mortality. Rothko’s paintings mirror our mortality more faithfully than he could ever have imagined.

I’d like to finish with the image of Barnett Newman’s Broken Obelisk (also cited by Lacayo). Newman’s Broken Obelisk illustrates better than any flag at half staff our world cruelly broken off and turned inconceivably upside down. But, despite this brokenness, in the face of all logic and reason, a precarious equilibrium is regained and an improbable new balance allows us to go on. The inverted pinnacle of this broken obelisk of life reaches to the bottom of the 21st century’s Pandora’s box and finds imagination’s greatest gift—hope. 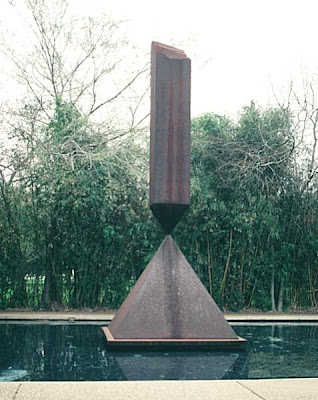