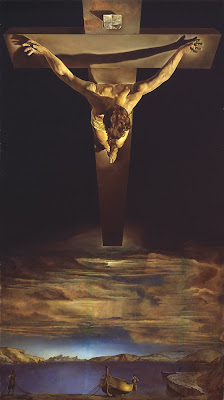 Salvador Dali’s Christ of Saint John of the Cross has been one of the most popular religious images of the 20th century. Dismissed by some critics as another of Dali’s show-off virtuoso works, many other viewers find it greatly moving. Dali’s religious paintings have always ranked among my favorites of his work. For me, although this particular painting wasn't there, they were one of the highlights of the 2005 PMA exhibit.

From a theological viewpoint, Dali’s painting is one of the most visceral expressions of Christ as the intermediary between God and humanity, literally hanging between the two worlds. Dali’s crucified Christ wears no crown of thorns in his tossled hair and the nails have been removed. The cross simply floats behind Christ as he looks down on humanity as the divine but in human form. It is a beautiful expression of the incarnation and the resurrection working together, with the gruesome details of the crucifixion removed to show the fullness of the Christ’s transformed humanity and transformation of humanity.

From a non-theological standpoint, Dali’s painting revives the humanism of the Renaissance for the 20th (and, I hope, 21st) century. Christ embodies human physical perfection, a Vitruvian Man from a bird’s eye view, measuring and embracing the span of all human experience. Growing up Catholic with a Catholic school education, I was amazed upon looking up the word “catholic” (little “c”) in a dictionary to find other meanings such as “universal,” “broad minded,” and even “liberal.” This catholic Christ takes in all of life, accepting and tolerating all. Rather than bind Christ to the cross, Dali superimposes the two, freeing both faith and humanism to coexist. Dali’s Christ is large, to paraphrase Walt Whitman, and contains multitudes, reclaiming the humanism of the Renaissance for the post-World War II, post-Hiroshima world. It is the rebirth of the classicism that prompted Terence to say, “I am a human being, and let nothing human be alien to me.” The same inalienable rights of “life, liberty, and the pursuit of happiness” found in The Declaration of Independence soar in this image of peace. “I want to paint a Christ that is a painting with more beauty and joy than have ever been painted before,” Dali explained. He succeeded.
Posted by Bob at 5:58 AM

Unless you're being Dali-esque surreal, I've lost you. If you ARE being Dali-esque, then you make perfect sense, although I would have gone with "Dali is Carol Channing."