The Guardian’s curmudgeonly art blogger Jonathan Jones asks “Why do you all dislike watercolors?” in anticipation of a J.M.W. Turner watercolors show this Summer at Tate Britain. I agree with David Packwood at Art History Today that, “[n]othing against Turner, but doesn’t his art, whatever the medium, get enough exposure?” But Jones’ gripe does raise the larger question of how watercolors are perceived.

From the eight-color sets for kids to the lyrics of “The Way We Were,” watercolors do often get the knock of being a lighter form of art, perhaps because it is the first color format many artists use, because many watercolors are simply studies for “more important” oils, because of the fragile nature of works on paper and issues of colorfastness, and maybe because amateurs such as myself can even give it a go now and then. (One of my favorite bits of JFK trivia is that he actually tried his hand at watercolors after some prompting by Jackie, who herself painted in watercolors.) 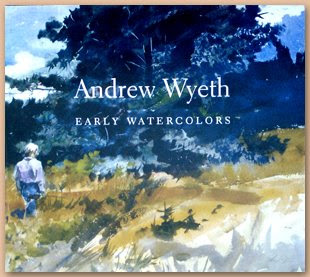 But I’d like to point out the incredible range of watercolor by using two examples from the same artist—Andrew Wyeth. Wyeth’s work in total suffers from a lack of appreciation, but his watercolors may be the least appreciated medium of all. Wyeth’s very, very early watercolors show such a freedom and love of expressive color that most people can’t believe that Wyeth did them. Wyeth has actually distanced himself from that time, favoring the more somber earth tones of his later tempera work. To flip through the catalogue of the exhibition of his early watercolors (catalogue cover above, the only image I could find online) is to wonder at the color and boldness of the best watercolors done by an American since Winslow Homer. 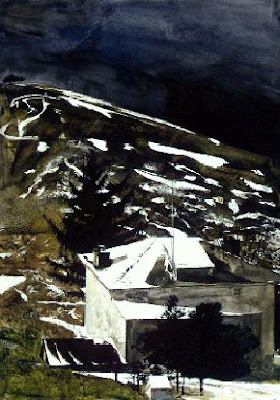 Wyeth did not give up watercolors entirely, but only the bold colors of his youth. Many of his later watercolors serve as preliminary works for his temperas, but others, such as Wolf Moon (shown above), stand alone. The contrasts of dark and white snow in the moonlight (actually the bare white paper reserved from the watercolor paint) are absolutely amazing. Seeing this work in person at the PMA retrospective exhibit of Wyeth’s work last year certainly put the magic into the “Memory and Magic” title of the show for me.
Posted by Bob at 6:50 AM