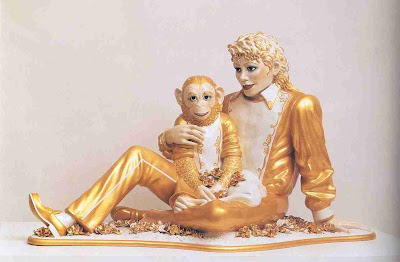 In the April 23, 2007 issue of The New Yorker, Calvin Tomkins profiles (not available online) one of my least favorite artists—Jeff Koons. (Koons’ life-sized ceramic statue of Michael Jackson and his pet chimp Bubbles is above. Groan with me, please.)

With the possible exception of crayon-wielding Cy Twombly, Jeff Koons qualifies as the most bafflingly “important” modern artist I know. The 1988 exhibit that made him a name was appropriately titled “Banality.” He’s been selling banality ever since. Tomkins quotes Kirk Varnedoe describing one of Koons’ other works as “one of those very rare hits at the exact center of the target” in its ability to fuse “a ton of contradictions (about the artist, about the time)… with shocking, deadpan economy into an unforgettable ingot.” I don’t presume to read the mind of the late, great Varnedoe, but I’m not sure if this “ingot” of the 1980s was necessarily a good thing in Varnedoe’s mind. Encapsulating the zeitgeist isn’t much of a feat when the zeitgeist sucks. Those of you who lived through the 1980s know what I mean. Think Flock of Seagulls.

Tomkins states that he “decided long ago that Koons believes what he says.” Even to need to make such a decision shows the fundamental problem of Koons’ art. Tomkins sees Koons’ mission as “reconciling ordinary people to their tastes and preferences,” quoting Koons own desire to “remove my own anxiety” as well as that of others to make “everything… so close” and “available.” The specific cultural problem of America is not too much anxiety but this relentless Koonsian desire to remove it rather than address it. Koons wants to be the king of denial, with media figures such as Anna Nicole Smith as his queen.

Is there any better barometer of American culture today than the ratio of the coverage of Anna Nicole Smith’s death versus that of Kurt Vonnegut? As tragic as Smith’s death was, her place in our society was miniscule next to Vonnegut’s, who helped shape the spirit of the 1960s and continued to address the anxieties of today in his A Man Without a Country. How long before the apotheosis of Anna Nicole appears out of Koons’ studio? Andy Warhol took Marilyn Monroe’s image and made it into a mirror of our society’s subsurface flaws. Jeff Koons takes figures such as Michael Jackson (and one day, mark my words, Anna Nicole Smith) and lightly spackles over the cracks of our time, neither analyzing our problems and anxieties nor offering any solutions.
Posted by Bob at 5:29 AM