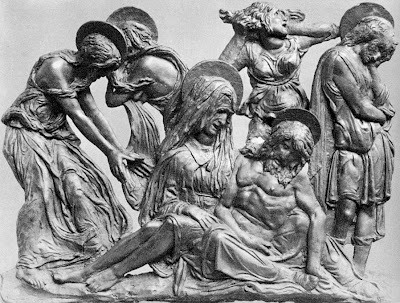 Donatello’s Lamentation over the Dead Christ seems like a work created in a time other than his own. If you didn’t know who sculpted this, you might guess from the roughness of the images that it was an Expressionist sculpture from the early 20th century rather than an Early Renaissance work from the 15th century. You might even see the hand of Rodin in this group sculpture that made me think of The Burghers of Calais when I first saw it, and not the hand that created the smooth, youthful David. What inspired Donatello to create such work so uncharacteristic of his time?

The religious answer would be Donatello’s desire to capture the anguish of the moment after the crucifixion, centering on the Pieta image of the Virgin Mary holding the dead body of Christ as the other figures each deal with their grief in their own unique way. Pieta is Italian for “pity,” deriving from the Latin “pietas,” and it is pity we are asked to feel for the fallen Christ and his suffering family and followers. The pity generated by this nadir of the Christ story is mitigated by the heights of the Resurrection to follow, but Donatello’s expressive working of the figures draws us in to live in this moment of the narrative and not “skip ahead” to the ending and, thus, rob the triumphant climax of the power derived from the struggle before.

This psychological insight gives Donatello’s Lamentation its relevance for non-believers. I remember reading somewhere some psychologist arguing that Rodin’s Burghers each represent one of the different stages of grief. Donatello and Rodin most likely did not have some checklist of grief in mind, but they did have a firm enough innate grasp of psychology to recognize the diversity of grief and to represent it in their sculptures. The consolation offered here comes from the knowledge that others suffer as we do and that grief has a beginning, middle, and end. What that end may be depends on what we believe.
Posted by Bob at 5:47 AM

From Sweden with Grief said...

Hello! I am a swedish woman who found this nice blog. I am myself a blogger on Blogger:) I am not a connoisseur of the fine arts, but I am an art-lover. This work of Donatello is realy dramatic and modern. Thanks for the presentation!