Images of Christ: Part II: William Holman Hunt, The Light of the World 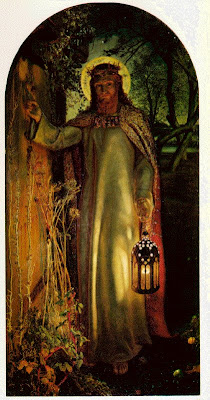 William Holman Hunt’s The Light of the World was the darling of the Victorian age. He painted three versions, two in the 1850s and another around 1900. Men would remove their hats in its presence. Schoolchildren would go quiet when entering the gallery where it was hung.

But why does it seem so unsatisfying to modern viewers? I think it’s because it represents a different approach to truth, religious and not, from our own today. Christ in this painting sheds the light of his theological truth on the world, comforting us with the knowledge that our belief will be rewarded, but that comfort seems cold today in light of the violence of our society. Actually, it is not so much the violence that breaks the spell, but our acceptance of that violence. The Victorian age spawned Jack the Ripper, yet was always able to keep a veneer of respectable gentility intact. The Victorian "faith" in the solidity of truth has dissolved in the great relavitity of truth (religious, political, and otherwise) we suffer under today, robbing us of any buffer from the cruelties of our own time. Comfort in religion today seems more desperation than true relief. We see too clearly the reflection in our world of our worse impulses and have grown too used to that reflection.

From a non-theological perspective, I see an icon of truth, Jesus Christ, playing the role of Diogenes of Sinope, the ancient Greek scold who searched with his lamp for an honest man, but in vain. Can we see Christ as a scold in this picture, his expression changed to one of searching rather than comforting? Is this truth (embodied in Christ) searching for honesty as it looks out from a Victorian framework into the 21st century world? In today’s sea of postmodern relativism and political opportunism, concepts such as honesty and truth may have foundered too deep to ever salvage.