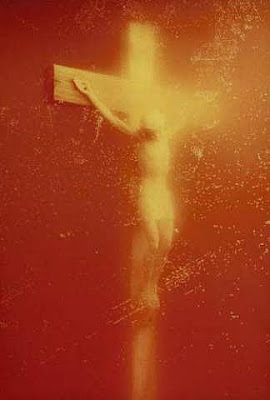 Could you imagine me starting with a stranger image for this series than the infamous Piss Christ by Andres Serrano? Are you offended? Is this too, say, provocative?
(Of course, the only way this could have been more provocative would be if it were made of chocolate. This post and the whole series were written before I or anyone else had ever heard of "My Sweet Lord.")
From a theological perspective, the message of Christianity is meant to be provocative. Serrano’s image could be seen as a modern sweeping clean of the temple, casting out the modern moneychangers, i.e., those who’ve made a commodity of Christ. Robert Hughes in his American Visions points to Piss Christ as the beginning of the culture wars in America, when the American Religious Right tried to dictate what was and was not art. I see Serrano commenting on the very social climate surrounding his art by placing a cheap plastic crucifix in a container of urine and giving it its vulgar title. In that reading, Christ is cheap and plastic, a fake belief system created by those befouling the truth of Christianity with their vulgar prejudices and power-seeking motivations.

I also see Serrano commenting on the reality of death at the moment he made his image. In 1987, the AIDS epidemic was beginning to take hold of the public consciousness. By placing the most iconic image of death (the crucifix) within the modern context of death (bodily fluids), Serrano links the two, taking the message of hope found in the grotesque image of the crucifix and affixing it to the bodily grossness of urine, here acting as a stand-in for AIDS.

But even more important than either of those readings is the ability of this image to provoke those readings. It shocks you out of your quotidian concept of what an image of Christ should be and makes you see it again. Like all good art (and good theology), it makes you think.
Posted by Bob at 7:32 AM

What has always struck me about this image is its luminous beauty. Had Serrano not mentioned "piss," the controversy never would happened.

I agree, Ed. I actually think that the golden color gives it an antique kind of look, almost like one of those old church icons rubbed smooth by devotion. Of course, without the title, nobody would have cared about this picture, especially the Religious Right, who gave Serrano more publicity than he ever had before. Cavallaro ("My Sweet Lord") is experiencing the same "unwanted" publicity right now. The only bad publicity for unknown artists is NO publicity. Kind of like bloggers.

Hello friends
As an art lover, I like to collect beautiful photos, I am a photographer, I always want to bring the best photos to you, or you can also use them as wallpaper for your phone,please visit this site:https://colorwallpaper.net/