The Art Newspaper interviews the official Iraq war artist of the United Kingdom, Steve McQueen (no relation to the actor) in their latest issue. McQueen, winner of the Turner Prize in 1999, wants to honor the war dead of the UK by placing portraits of individual fallen soldiers on postage stamps. “I didn’t want to make an object that was gathering dust in a museum, somewhere that hardly anyone knew about,” McQueen says. The initial application for the stamps has been rejected by the Royal Mail, but McQueen hopes that the 5-year waiting period will be waived (as had been done for a victorious English cricket team in 2005) and his work will made available to the public.

The documentation of war by art is always a difficult proposition. England chose John Singer Sargent to document their involvement in World War I. Sargent’s Gassed (above) remains the finest painted image of modern warfare for me. Troops blinded by mustard gas lean on one another as they march forward in this almost frieze-like image. Unfortunately, Sargent’s depiction met with some displeasure for displaying the cost and, perhaps, the visionless madness of armed conflict. 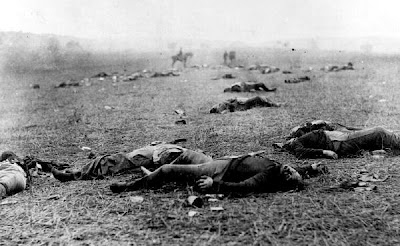 I do not know if the United States has chosen an artist to depict American involvement in Iraq or Afghanistan, but it’s hard to imagine something like that happening in the current cultural climate. American artists’ depictions of war usually tend towards portraits of generals. The only true American war artist that I can conjure up is Mathew Brady, whose photography of the American Civil War remains the definitive portrayal most Americans have of that conflict. Brady’s photo of fallen soldiers at the Battle of Gettysburg (above) poignantly captures the tragic drama of war. Some have accused Brady of posing some of the dead to create more dramatic images, as if that were some kind of cheating, somehow making death in battle more dramatic or even beautiful than it is in reality, propagating what Wilfred Owen called “the great lie” that “it is sweet and right to die for one’s country” in the poem “Dulce et Decorum Est.”

I don’t see Brady’s artistic license (assuming he exercised it) or Sargent’s classical allusion as glossing over the senseless reality of war as much as infusing it with meaning. Their images serve those who remain more than the fallen, reminding us of a great cost and why that cost should never be paid again. Any artistic license that engages the viewer should be welcomed. These are not propaganda glorifying war but testimonies to its inglorious consequences. We can only hope that McQueen gets the opportunity to present those consequences to the British public each time they receive or mail a letter.