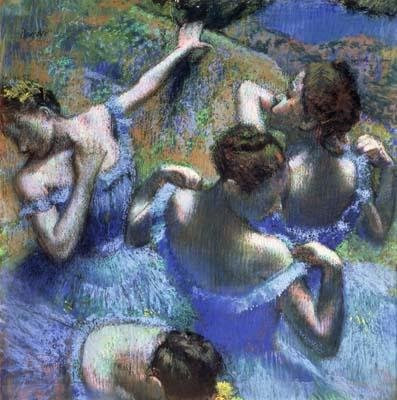 A piece in today’s New York Times spotlights an article in the Archives of Ophthalmology by Dr. Michael F. Marmour in which the good doctor has created computer simulations of the failing eyesight of Edgar Degas and Claude Monet to judge whether their later styles were a consequence of their afflictions.

Experts believe that Degas suffered from macular degeneration. Photos exist of Degas wearing sunglasses late in life. Monet had his cataracts removed in 1923 and actually destroyed some paintings he’d made shortly before the surgery.

Degas’ Blue Dancers (shown above), one of my favorite of his pastels, may illustrate some of the effects of his macular degeneration. However, if you look at Marmour’s computer simulation in the New York Times article, it shows a blurred image that could possibly account for the blurred details of the dancers faces, but it does not account for the vibrant strokes that make the image almost vibrate with color. I’d argue that Degas compensated for his loss of vision by simplifying his imagery, making the form of the dancers simply a skeleton upon which he could experiment with gesture and color. This simplification could have been a natural progression from his earlier, more realistic style. I just feel that it is unfair to attribute his later style simply to his affliction.

As I said before with Da Vinci’s possible syndactyly, such medical speculation is fun and possibly edifying, but I’m not sure if it’s constructive here. This theory may just further propagate the myth that Impressionism is a byproduct of myopia. (I'm blind without my glasses and still can't paint for beans.) If I had a nickel for every time I overheard someone looking at a Monet and commenting on his lack of eyesight, I’d retire. (Of course, Monet did destroy some of his works postsurgery, but his use of Impressionist technique predates his medical problem. It wasn’t that he disliked all his Impressionist works, but just the ones he did later in life. Impressionism was a means by which the effects of light could be examined, not the photographic representation of what the artist was able to see clearly at the moment.)

I view this theory the same way that I view Beethoven’s ability to compose after his deafness. The essential genius and the stored musical memory remained even after his hearing abandoned him. Likewise, Degas and Monet’s genius and stored visual library of gestures and techniques allowed them to continue to paint and overcome (perhaps with varied success) their poor eyesight.
Posted by Bob at 9:13 AM