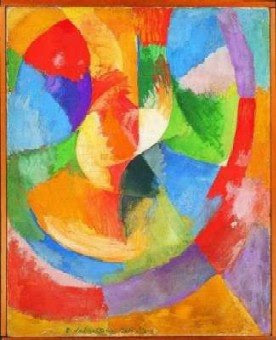 The Orphic painter Robert Delaunay was born on this date in 1885, but it is his wife Sonia Terk Delaunay that captures my imagination today. (Robert’s Forms Circulaires is above and Sonia’s Electric Prisms is below.) 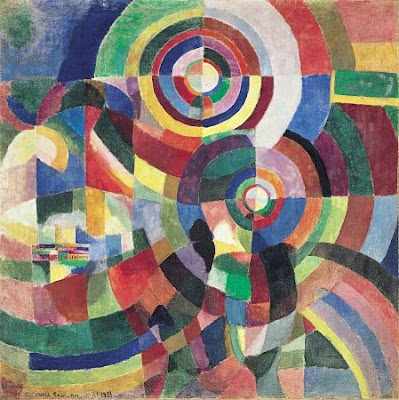 “From the day we started living together, I played second fiddle and I never put myself first until the 1950s,” Sonia once said (quoted in Whitney Chadwick’s Women, Art, and Society, 3rd ed., page 261). Despite playing “second fiddle” until well after Robert’s death in 1941, in 1964 Sonia became the first living female artists to have a retrospective exhibition at the Louvre. What she could have accomplished if she had decided not to devote more energy to Robert’s career is one of the great “what if?” questions of art.

Sonia Delaunay’s story makes me think of other women who have voluntarily played a more supportive role at the expense of their own art. Lee Krasner, wife of Jackson Pollock, and Susan MacDowell Eakins, wife of Thomas Eakins, both come to mind. Krasner’s work appears at the MoMA near Pollock’s and looks similar enough to make you wonder sometimes where the influences begin and end. Susan Eakins studied under Thomas Eakins at the PAFA and was an award-winning student. (Susan’s painting in the Thomas Jefferson University gallery may be the only Eakins’ painting at TJU not currently up for bid, but only because it’s on loan to them.) I’ve looked at Susan Eakins’ work and often thought how easy it is to dismiss her as just Thomas’ wife and student, but, as with Sonia Delaunay and Lee Krasner, how far they could have gone if the roles in their marriages had been reversed will never be known.
Posted by Bob at 5:58 AM