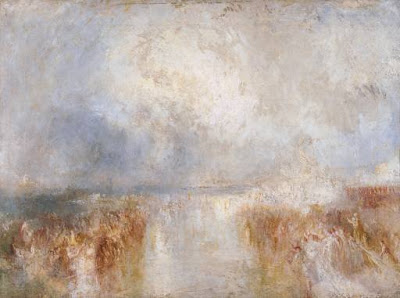 To celebrate the 50th anniversary of the creation of the European Union, each country in the union has been asked to select an artist to represent their country. The choices have been a hot topic of debate. Here’s a short list of some of the representatives:

Turner seems a no-brainer to me for England. I have a book about Turner subtitled “Painting the Nation,” and for much of his career he did exactly that, and better than any other British painter since. Austria’s choice of Schiele is the boldest choice to me, over Gustav Klimt, and with a risqué nude, no less. Rodin seems a compromise choice over the scores of Impressionists France had to choose from. Velazquez represents Spain beautifully, but either Goya or Picasso would have done just as well (or perhaps even better if one of their works on warfare in the past were chosen to comment on the warfare of today).

The two most befuddling are Titian for Italy and Mondrian for The Netherlands. Italy had perhaps the toughest field, with Da Vinci, Michelangelo, Raphael, and so many others to choose from. I would have put Titian behind those three (and maybe a few more). Mondrian, although significant to modern art, simply cannot stand up to Rembrandt or Van Gogh, at least in my mind.

It seems as if different countries used different criteria for their selections, with some going more modern and others more “old school.” Perhaps Italy could have avoided the whole Renaissance and gone modern as well, choosing Umberto Boccioni, the finest artist from the Italian Futurist school of the early 20th century, Italy's only truly homegrown modern art movement. They’ve already put his best work, Unique Forms of Continuity in Space, on a coin.

Who would America have sent? I would nominate Thomas Eakins, but I may be biased by my love of his work and his ties to Philadelphia. Jackson Pollock? Edward Hopper? Thomas Kinkade? OK, that last one was a joke.

Feel free to leave in comments who you think would best represent America. As the kids say today, "Gotta represent."

Imagine the disaster if nominating an American artist were a political decision. Who could beat Norman Rockwell?

I'd go with Eakins, too.
Or that guy who painted the dogs playing poker. Now that's a classic, especially on black velvet.

And what's so bad about Norman Rockwell? When people see his work, they know they are looking at a slice of America (albeit a nostalgic slice). Who else has created images of everyday people in ordinary situations, evoking emotions ranging from the whimsical to the spiritual?