The Left Hand of Leonardo 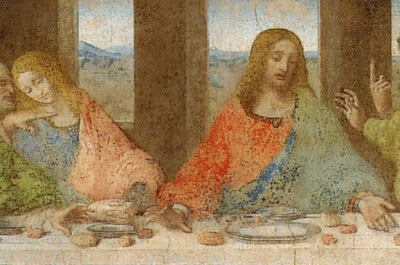 Ben Sweeney, a real estate broker from San Diego, California, and Leonardo Da Vinci enthusiast, proposes the theory that Da Vinci’s left hand was malformed by a condition called syndactyly, in which two of the fingers are fused together. After consulting with some medical professionals who agree with him, Sweeney makes the claim that the left hand of Jesus in The Last Supper (detail shown above) shows signs of syndactyly. Critics have previously believed that such “deformed” hands in Da Vinci’s work were either due to bad draftsmanship or a stroke that Da Vinci had suffered. Could this actually be a kind of signature by Da Vinci, a true Da Vinci "code" presenting his disability (and overcoming of that disability) to the world?

I don’t know if this is true or not. It may be impossible to prove scientifically. Speculation like this, similar to finding the cause of Beethoven’s deafness or Van Gogh’s madness, always seems interesting but ultimately unsatisfying. However, the thought of Da Vinci, one of the greatest minds and artists of Western civilization, accomplishing everything he did with such a handicap renews my faith in the endless capacity of the human spirit to overcome any obstacle.
UPDATE: Ben Sweeney now has a site dedicated to presenting his theory. (Via Art History Today, which has more coverage on this.)
Posted by Bob at 6:01 AM