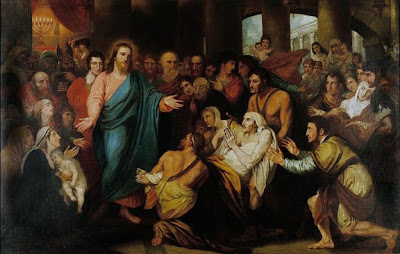 I took another field trip this week to see someone in the hospital, specifically Benjamin West’s Christ Healing the Sick at the Pennsylvania Hospital in Philadelphia. Sadly, it looks like the painting needs some healing itself—stat! (Above is another version of the painting. The Pennsylvania Hospital version is similar but has an obviously mentally ill patient added to acknowledge the hospital’s pioneering work with the mentally ill.)

Layers of dust cover the painting. Dust bunnies cling to the surface and hop across the floor in front of it. The surface of the huge painting buckles visibly in large sections, probably coming off of the stretcher and tearing away from the frame after years of gravity taking its toll. Someone had even wiped their fingers in the dust near the bottom left corner of the painting. My amazement at the achievement of this great example of the grand style of epic painting was matched only by my astonishment at its neglect. 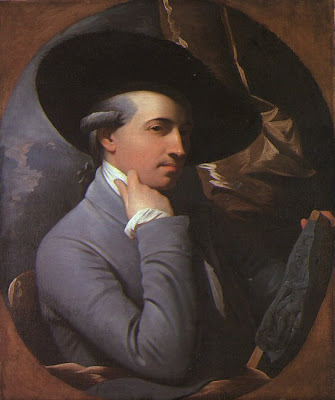 I believe that one of the figures is a self portrait of West himself (over to the right, to the left of the woman in the white head scarf). Painters commonly would insert their likeness into such epic works, hiding among the “extras.” That head shows a much greater level of exactness than that of any of the others, including that of Christ. Looking at an acknowledged self portrait of West (above), I’m pretty sure I have a match. The idea of West being a bystander to his work’s destruction just makes things seem worse.

Perhaps when West’s work is added to the Philadelphia Hospitals’ Wing of the Walmart Museum of American Art, they’ll take better care of it.
Posted by Bob at 7:48 AM