The Peaceable Kingdom of Edward Hicks 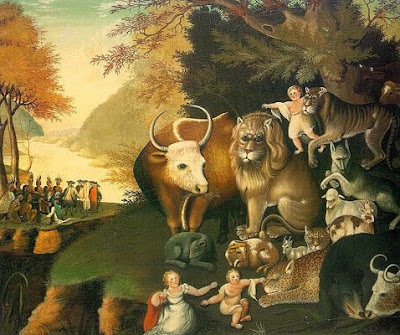 Edward Hicks, famous for his Peaceable Kingdom paintings, was born on this day in 1788. Sixty-two versions of The Peaceable Kingdom are in existence today. Hicks’ paintings were largely forgotten until the 1920s, when he was re-discovered as an early master of American folk art.

I remember seeing the Hicks exhibit at the PMA in 1999 and coming away with a greater respect for his work. It is easy to dismiss Hicks’ work (and much folk art) as less than truly museum-worthy, especially because of the repetition of his major theme, i.e., illustrating the words of Chapter 11 of the Book of Isiah, “The wolf also shall dwell with the lamb, and the leopard shall lie down with the kid; and the calf and the young lion and the fatling together; and a little child shall lead them." But it is the child-like innocence of his work along with the obsessive nature of his Quaker faith that made his work so striking. It was also enlightening to see paintings of other subjects by him to realize that he really was working in an unique style. (The Wikipedia entry for Hicks shows some of these other paintings.)

Growing up as a Philadelphia kid, I always got a kick out of the little scene of William Penn, founder of Pennsylvania, negotiating with the Lenape Indians in the background of many of Hicks’ versions of The Peaceable Kingdom. It was just another part of what seemed like the quaint Quaker beginnings of a city now drowning in its own violence.

Now that I have a child, I can enjoy Hicks in a whole new way—as part of the educational children’s show Little Einsteins. Each episode of Little Einsteins has four kids go on an adventure featuring a great work of art and a clip of Classical music. In the episode “I Love to Conduct,” the animals in Hicks’ Peaceable Kingdom come to life to help the kids on their mission. Seeing Hicks’ lion move within the scenery was unforgettable. My little boy liked it too, I think.
Posted by Bob at 5:53 AM