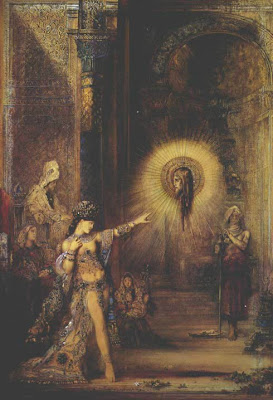 Today is the 181st birthday of Gustave Moreau, born in Paris, France, in 1826. Moreau not only was a great artist himself, creating much of the style that was to become the Symbolist school, but was also a teacher of other masters such as Henri Matisse and Georges Rouault.

(Shown above is Moreau’s Salome Dancing [The Apparition], with Salome dancing before Herod as John the Baptist’s spectral head floats in midair. I’ve always been fascinated by this painting since I saw it on the cover of a CD I have of Richard Strauss’ 1905 opera Salome.)
Moreau is one of those "six degrees” figures in art. Through Matisse and Rouault, he influences Fauvism. Through Fauvism, he influences Expressionism, which created a taste for the work of Edvard Munch, who had to go to Germany to be appreciated in his native Norway and the rest of the world. And, as I discovered in the catalog to the recent Metropolitan Museum of Art exhibit Americans in Paris 1860-1900, Moreau even had some contact with American artists studying in Paris, who then brought back home what they saw and learned. Moreau’s contribution to Symbolism itself helped make it a worldwide movement in the second half of the 19th century.
If I ever get back to Paris, the Musee Gustave Moreau is on my list of the many great single-artist museums to visit (along with those for Picasso and Delacroix). As if I could ever have enough time to see everything I wanted to see in Paris.
Posted by Bob at 6:45 AM