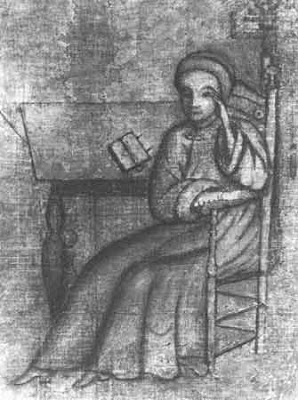 My friend Dave kindly pointed out to me a passage in a book of his on the Wissahickon Creek and Valley in Philadelphia, Pennsylvania, where the author claims that Dr. Christopher Witt's 1705 oil portrait of German mystic Johannes Kelpius (1673-1708) was the first oil painting made in America. The Historical Society of Pennsylvania owns the original shown above, which is in bad shape and is difficult to see. The print below, made years later, most likely resembles what the painting would have originally looked like. (I've tried to research this "first oil painting in America" claim on the internet with no luck. Should anyone have information to the contrary, please let me know in the comments or by e-mail.) 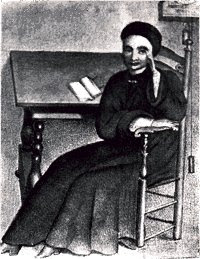 Kelpius and his followers came to the shores of the Wissahickon in 1694. Kelpius was a Pietist mystic who some believed possessed the Philosopher's Stone, which he had his followers toss into Wissahickon Creek upon his death, never to be found again. The Cave of Kelpius (shown below) can still be visited by hikers who wander down Hermit's Lane near the Hermitage Estate of Wissahickon Park. 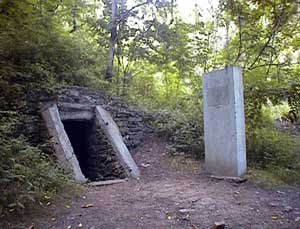 Kelpius also has ties to George Lippard, who wrote about (some say misrepresented) Kelpius and his followers in his novel The Rose of Wissahikon; or, The Fourth of July, 1776. A Romance, Embracing the Secret History of the Declaration of Independence (1847) . Lippard's immensely enjoyable The Quaker City; or, The Monks of Monk Hall is currently being blogged by Ed Pettit of The Bibliothecary Blog over at his special Quaker City Blog. (Disclaimer: As my wife will warn you, my definition of "immensely enjoyable" may vary from yours. If yours includes sometimes overheated 19th century prose ala Poe, polyvocal storytelling ala Melville, and dialects ala Twain, then check it out.)

[Many thanks to Dave for the tip on this little-known gem. Thanks!]
Posted by Bob at 10:58 AM