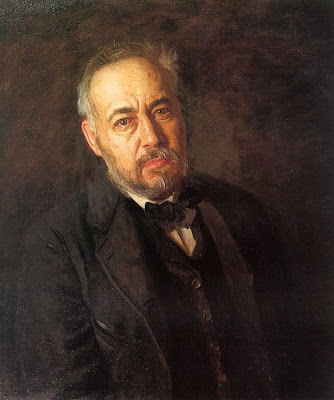 Maybe some good will come out of the debacle of the Thomas Jefferson University's sale of their paintings by Thomas Eakins after all. (Eakins' Self-Portrait is above.) Auditions were held yesterday at the PAFA for an actor to play Eakins around the city of Philadelphia for tourists, similar to actors who now portray Benjamin Franklin and other historic figures. The audition was poorly advertised (scroll down to "auditions," where the Eakins call was listed after Big Brother and The Real World auditions), so turnout was poor. (Please also note that The Philadelphia Inquirer also couldn't resist stating in the caption to the photo that "nudes need not apply.") Each actor had to perform a monologue in character, "teach" a painting class, and answer questions from Eakins experts.

Perhaps Philadelphia is finally learning to embrace their inner Eakins, if for no other reason than the tourism buzz and accompanying dollars generated by the selling of The Gross Clinic and its new alternating homes at the more accessible PAFA and PMA. The almost complete ignorance of Eakins, one of America's greatest painters, in his own home town of Philadelphia has always been a great source of frustration for myself and my other art-loving friends here in the City of Brotherly Love.

Of course, now that the city fathers have decided to loose a living, breathing "Eakins" upon the world, the next step will be which "Eakins" will be portrayed: the misunderstood genius of Lloyd Goodrich's writings, the borderline sociopath "revealed" recently by Henry Adams, or some amalgam of the two. One step at a time, I guess. One step at a time.
Posted by Bob at 6:00 AM