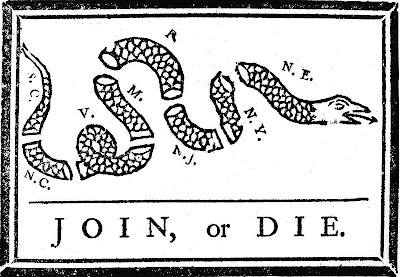 In a little under a month from now, Americans will decide who will be making the big decisions for the next four years. The recent flap over Barry Blitt’s satiric cover of the July 21, 2008 issue of The New Yorker, titled “The Politics of Fear,” featuring Senator Barack Obama and his wife Michelle in poses straight from a paranoid conservative’s nightmares reminded many Americans of the power of political cartoons to inflame and, perhaps, even enlighten. Donald Dewey’s The Art of Ill Will: The Story of American Political Cartoons traces the history of American political cartooning back to the very beginning—Benjamin Franklin’s Join, or Die (above, from 1754), which he actually printed in response to colonial infighting over supporting England in the French and Indian War but was later repurposed for unity in opposing England during the American Revolution. Franklin’s crude illustration reflects the crude beginnings of political cartooning in America, which developed along with the nation into a golden age of the second half of the nineteenth century only to lapse into a slow and excruciating long decline that reaches to our very time. Dewey presents the good, bad, and the ugly of political cartooning and provides an overarching narrative that puts all the different images so heavily tied to their time and place into a coherent, troubling narrative. 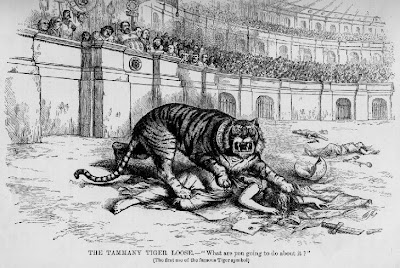 Dewey allows no illusions about the role of political cartooning in American politics. “Originality, outlandishness, and impact had always been at the service of a periodical seeking more circulation and advertising, a political party seeking to score points against an opponent, or some other interest seeking to ensure one of both objectives,” Dewey explains with clear eyes. Amidst a sea of cynical opportunism reaching from the very beginnings of the nation and the infamous Jefferson—Adams election of 1800 to the corrupt spoils system of the post-Civil War period, Thomas Nast rises above the waters and provides Dewey with his first hero of the drawing board. In images such as The Tammany Tiger Loose (above, from 1871), Nast waged war on Boss Tweed's Tammany Hall political machine through scathing symbolism that spoke to the illiterate immigrants hit hardest by Tweed’s machinations. As The Tammany Tiger rends another innocent taxpayer limb from limb, the Nero-esque Tweed looks on approvingly, even daring the masses to do something about it. Nast, indeed, did something about it, inundating the public imagination with pictures of Tweed’s criminality more than fifty times in the second half of 1871 alone. Tweed even tried to bribe Nast with $100,000 to go to Europe to “study art” and leave him alone. Tweed lost power in 1871 and found himself in jail in 1872, thanks in some part to Nast’s efforts. “Nast… refused to draw anything he didn’t believe in,” Dewey writes, “leading him to disappear from Harper’s for months at a time because of the weekly’s support of Rutherford B. Hayes and his own disdain for the president.” Such a principled stand makes Nast one of the few untarnished heroes of this period, more remarkable for perpetuating power and racist stereotypes than for standing up for the little guy. “Give me a good cartoonist, and I can throw out half the editorial staff,” Dewey quotes H.L. Mencken saying. This power of the single image proved a valuable tool—one that the authorities often looked to control. Abraham Lincoln and Ulysses S. Grant both acknowledged the role of Nast’s cartoons in the Civil War and Reconstruction, years before Nast took on Tweed. However, government more often sought to suppress the power of political cartoonists, especially in the twentieth century, when Socialism and its pacifist creed challenged America’s moral authority in going to war. Robert Minor’s Army Medical Examiner (above, from 1916) questioned Woodrow Wilson’s plea to enter the United States into World War I by creating the “perfect soldier”—namely, one with no head to think and disagree. Publications such as The Masses provided an outlet for such cartooning outside of the mainstream newspapers tied up by corporate interests themselves tied to government—the very beginnings of the American military-industrial complex. By 1918, government repression forced The Masses to end publication as some cartoonists found themselves in jail for protesting American involvement in the war and refusing to personally join the cause. Another outstanding cartoonist of this period, Homer Davenport, satirized William McKinley and his stage-manager Mark Hanna, the Karl Rove of his day, for William Randolph Hearst’s chain of newspapers, working within the establishment media to undermine the establishment. 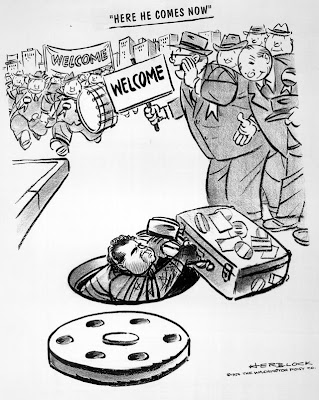 The history of American political cartooning often takes the form of their targets—from the hatchet-faced Andrew Jackson to an almost bestial Abraham Lincoln to the mustache and glasses of Theodore Roosevelt to the chin and cigarette holder of Franklin Roosevelt. Although symbols such as Uncle Sam and John Q. Public sprang from cartoonists’ brains, they could never match up to the real thing. And few victims of cartoonists’ pens ever had as much to complain about as Richard Milhous Nixon, perhaps the most caricatured face in American political history. Rick Perlstein’s Nixonland: The Rise of a President and the Fracturing of America cites Herblock’s 1954 cartoon, Here He Comes Now, as a prescient depiction of Nixon’s willingness to play gutter and even sewer politics. “Nixon was to cartooning what Marilyn Monroe was to sex,” cartoonist Doug Marlette once said. “Nixon looked like his policies. His nose told you he was going to bomb Cambodia.” Along with Bill Mauldin and Paul Conrad, Herblock instituted a brief renaissance in American political cartooning in the mainstream media that died as quickly as it began. “Except for the Herblocks, Mauldins, and a few others,” Dewey laments, “cartoonists over the years have generally done what they have been told to do or anticipated being told to do, or they have not had the imagination to improve on what it had been a bad idea to do. One reason [such names] have stood out is that they have been exceptions.” Dewey often strikes the note of fear that such exceptional figures may no longer find a place in mainstream media.

The strongest part of Dewey’s argument for the decline of American political cartooning comes through in his analysis of the ever-increasing connection between politics and entertainment. Gary Trudeau’s Doonesbury strip (shown above searching for Ronald Reagan’s brain in 1987), although highly praised and awarded, contributes to the blurring of the line between government figures and celebrity by bringing serious issues to the “funny pages.” On the other side of the political spectrum, conservative strips such as Mallard Fillmore further muddies the water by making political ideology itself speak through cartoon mouthpieces. “When a real politician becomes a stock character in a fictional scenario,” Dewey cautions, “no matter how critically he is treated, he enters a protective zone that has little in common with the goals of a potent editorial cartoon.” Doonesbury and its children literally take more of the bite out of the already toothless modern American political cartoon by prioritizing laughs over social commentary. Dewey’s pessimistic view of the history of the American political cartoon leads him to question whether such images have always been just entertainment, “with congressmen and presidents taking the role of mothers-in-law for the joke telling?” 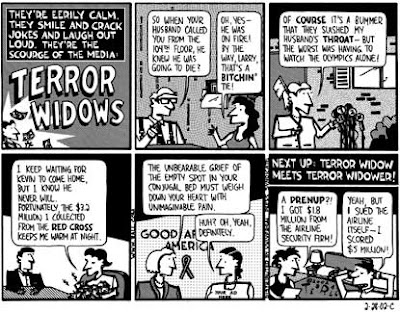 The maverick world of underground cartooning, pioneered by artists such as Jules Feiffer at The Village Voice in the 1950s, still struggles for space in the collective American consciousness today. Too often, that space comes only when highly controversial strips such as Ted Rall’s Terror Widows (above, from 2002) hit hot button issues such as the September 11th attacks. The wide-open world of the internet allows underground comic artists to poke and prod at the establishment façade, yet resistance seems futile in the face of monolithic media conglomerates and the fast-approaching demise of the daily newspaper as cable television news takes its place. Such abrasiveness as Rall demonstrates may the last hope for cracking open the mind of America. Herblock knew his Mr. Atom character, created to represent the dangers of atomic warfare, had lost his punch when someone described it as “cute.” Cute no longer cuts it when the stakes are this high for the American civilization. 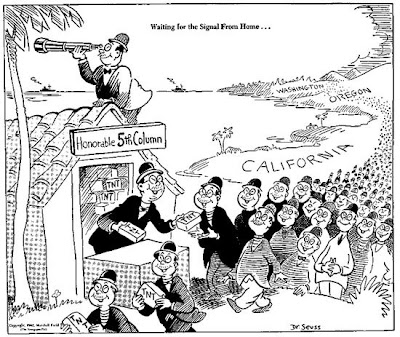 Perhaps the greatest revelation of The Art of Ill Will is just how American political cartooning has reflected the racist nature of America itself. Even Theodore Geisel, the future Dr. Seuss, could indulge in World War II-era anti-Asian stereotypes in a 1942 cartoon titled Waiting for the Signal from Home (above), which shows Asian-Americans looking to Japan for a signal to sabotage the American war effort. Just hours after Geisel’s cartoon ran, the order for the internment of Japanese-Americans passed. Anyone looking for a valentine to the ideals of American democracy shouldn’t open The Art of Ill Will. If you’re looking for a thought-provoking history of how popular images have shaped and been shaped by the course of American history, however, The Art of Ill Will may make you a little ill at first but should inoculate you to even the strongest strains of partisan fever.


[Many thanks to New York University Press for providing me with a review copy of Donald Dewey’s The Art of Ill Will: The Story of American Political Cartoons.]