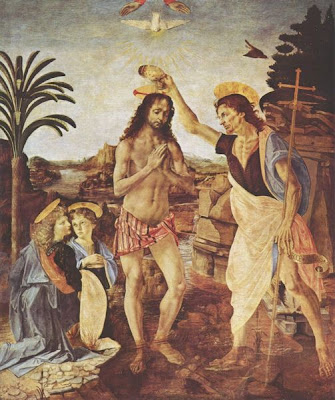 It must be a complex set of feelings for any teacher to see his student surpass him or her—a mixture of pride and, hopefully less, envy. When Andrea del Verrocchio painted the Baptism of Christ (above, from 1474-1475) for the monastery of San Salvi in Florence, he delegated some of the “minor” elements to students in his workshop. Little did Verrocchio, who died October 7, 1488, know that those “minor” elements would soon overshadow the work of the supposed master. Born sometime around 1435, Verrocchio assigned the painting of the angel on the left holding Christ’s clothes to his star pupil, Leonardo da Vinci. (Legend has it that the angel on the right was assigned to another promising student, Sandro Botticelli.) Soon viewers found themselves captivated more by that angelic face and the landscape behind the angel (also by da Vinci) rather than the central scene of Jesus’ baptism. A star was “born” in this painting, and da Vinci soon found his way to the top of the Renaissance art world. Master painters usually delegated parts of commissions to their assistants, saving the choice parts for themselves. Usually, those supporting elements go unnoticed, and the names of those assistants are forgotten. In this one case, however, the name of the master Verrocchio has been largely forgotten and da Vinci remains the household name. 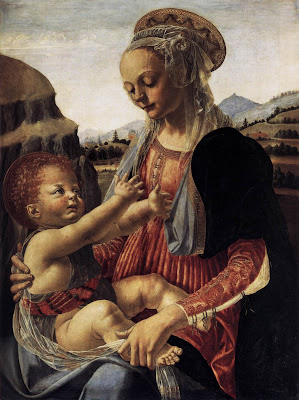 Verrocchio didn’t necessary upstage his painting master, Fra Filippo Lippi, but he did learn enough to break out on his own and start his own workshop. After training to be a goldsmith as a young man, Verrocchio learned the fundamentals of painting from Lippi and the art of sculpture from Donatello. Although Verrocchio split time between painting and sculpture evenly up until the mid 1470s, he still managed to paint in a sculptor-like style. Verrocchio’s Madonna and Child (above, 1470) shows a great grasp of the depth and weight of the figures, as if they were statues. However, they are statuesque without being stiff, imbued with the humanizing psychological depth that characterized the entire Renaissance. Verrocchio clearly enjoys painting the drapery and veils of the Virgin Mary and the Christ child, showing off his ability to render fabrics convincingly. The landscape behind them, perhaps done by Verrocchio or assigned to an assistant, followed the conventions of the time but also impressed in the young da Vinci’s mind the value of such little details, which he placed not only in his religious subjects but even in secular portraits such as the Mona Lisa.

When Verrocchio tackled the story of David and Goliath in his sculpture The Young David (above, from 1473-1475), he clearly acknowledged his debt to and announced his distance from Donatello, whose own David set the current standard for that Biblical hero. Donatello’s David stands over the severed giant’s head nude, his helmet worn at a jaunty angle, one hand cockily on his hip, and a foot placed triumphantly on Goliath’s head. Verrocchio’s David plays it cooler, his head uncovered, his body covered by a simple yet elegant toga, a hand placed on his hip in a relaxed but not cocky way, and a foot placed respectfully beside his vanquished foe’s head and not on it. Donatello’s David seems ready to talk trash while Verrocchio’s version exudes quiet confidence. When Michelangelo sculpted his definitive David, he fused elements of these two predecessors together. Depicting David before the battle, Michelangelo sculpted him in the nude like Donatello and with a clear sexual energy like Donatello, but the overall mood is more like Verrocchio—calm, quiet confidence in who he is and what he can do. Perhaps Verrocchio the teacher shared that same steady confidence in his abilities even as he watched a new generation of genius grow under his watch and leave him behind.