Pictures from a Crucifixion

There’s a magic in the number one hundred. The centennial of an artist’s birth suddenly sets off an explosion of analysis. Frida Kahlo fans found that out in 2008. 2009 will be the year of Francis Bacon, born October 28, 1909. The Tate Britain has already started things off with a massive exhibition that will make its way to America and the Met starting next May. I’ll have to talk Annie into making a trip up from Philadelphia to see the show. Annie’s trepidation at seeing Frida full force gave way to wonder and appreciation, but I’m pretty sure that Francis will be a harder sell. There’s just so much bizarreness in works such as Three Studies for Figures at the Base of a Crucifixion (above, from 1944) that it’s hard to explain the power and grotesque beauty of these works. I’ve always been fascinated by Bacon’s work as an emblem of the caravan of cruelty we called the twentieth century. The Tate’s already promised me a review copy of the exhibition catalogue, just one of the many Bacon-related books set to hit the shelves. Yet, whereas Frida had Fridamania, I’m not sure a Baconpalooza is in the cards, but it should be. 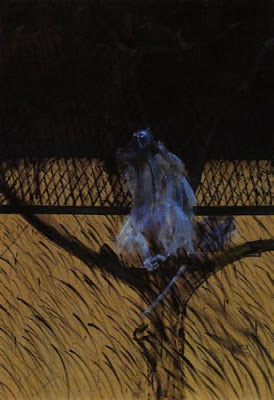 Bacon’s always seemed a sort of magpie painter to me, stealing bits here and there from the masters, most notably Diego Velázquez in works such as Study after Velázquez's Portrait of Pope Innocent X (1953). But Bacon went outside of the art world to find inspiration as well. Scanning medical textbooks full of diseased mouths and oral anomalies, Bacon took those images and inserted them into works such as Three Studies for Figures at the Base of a Crucifixion and Study after Velázquez's Portrait of Pope Innocent X as a sort of primal scream therapy to deal with the horrors of modern living. This primal approach even included actual primates, such as in Study of a Baboon (above, from 1953). Bacon’s rough way of handling the human figure sometimes devolved it into apelike status, as if shedding all the cultural garb to reveal the naked ape beneath. Bacon once remarked that reading Nietzsche as a young man in search of himself was a pivotal experience. Like Nietzsche, Bacon tears down all the old gods and the truths holding them up, preferring new truths or no truths at all rather than truths that were no longer operative. What will make the Bacon centennial especially interesting will be the presence of Bacon himself in film footage. Bacon cooperated with many interviewers and documentary filmmakers over the years and never shied away from self-promotion. Openly gay, Bacon revealed perhaps too much of himself, but anything less would be untrue to his art. Bacon’s Self-Portrait (above, from 1973) shows Bacon twisting and contorting even his own image, reflecting the twisted nature of his own, often self-destructive soul. Leaning against a sink, Bacon may either be simply weary or, perhaps, dipping his hidden hand into the water to allow a slashed wrist to bleed out into oblivion. Bacon painted this Self-Portrait soon after he painted Triptych, May-June 1973, his recording of the suicide of his lover, George Dyer. Perhaps Bacon wanted to record his own suicide before the fact and never completed the act itself. (Dyer died in a bathroom, the room Bacon paints himself in.) Such naked self-analysis makes Bacon one of the most fascinating and enigmatic artists of the past century and will continue to make him a name to remember in the next century.

Thanks for the tip on the upcoming Bacon exhibitions. I always thought of Bacon as a sort of modern Hieronymus Bosch -- very disturbing, but you can't look away.