Friendly Boy Walking Along in the Sun 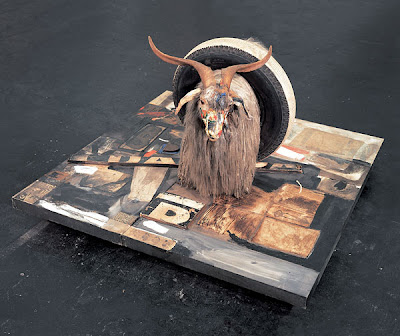 When 2008 began, the short list for greatest living American artist usually included Andrew Wyeth, Jasper Johns, Cy Twombly, and Robert Rauschenberg. Sadly, Rauschenberg left that list on May 12th at the age of 82. Born October 22, 1925, Rauschenberg, who preferred to be called “Bob,” once said, “"I feel as though the world is a friendly boy walking along in the sun." Such sunny optimism stood out amongst the angst-ridden Abstract Expressionists such as the self-destructive Jackson Pollock who were Rauschenberg’s 1950s contemporaries. "You have to have the time to feel sorry for yourself in order to be a good abstract expressionist," Bob later said. There’s a degree of playfulness and fun in works such as Rauschenberg’s Monogram (above, from 1955-1959), the “combine” consisting of a painted goat and a tire, that approximates the sense of joy in art that Marcel Duchamp tried to convey in his works better than the work of any other modern American artist. In many ways Monogram actually is Rauschenberg’s signature, with every inch stamped with his creativity and casual approach.

"I think a painting is more like the real world if it's made out of the real world," Rauschenberg said around the time he presented his Bed (above, from 1955), literally his bed cover painted and mounted on a wall. For a major American artist, Rauschenberg had stunningly little skill as a painter or sculptor. Rauschenberg’s talent rested in his ability to take the very stuff of life and elevate it to the status of art like an alchemist transforming base metal into pure gold. You can’t even call Rauschenberg an “idea man,” because he didn’t work in abstract ideas as much as in practical production. From what I’ve read of him and the documentaries I’ve seen, Rauschenberg never stopped working, as if the impulse to create art were as essential to him as breathing. Such relentless creativity, of course, means you’re not going to be 100% successful, but that never deterred him. "Screwing things up is a virtue,” Rauschenberg responded to our perfectionist world. “Being correct is never the point. Being right can stop all the momentum of a very interesting idea.” I don’t think I’ve ever read a better rationale for fearlessness not only in art but in all aspects of life. 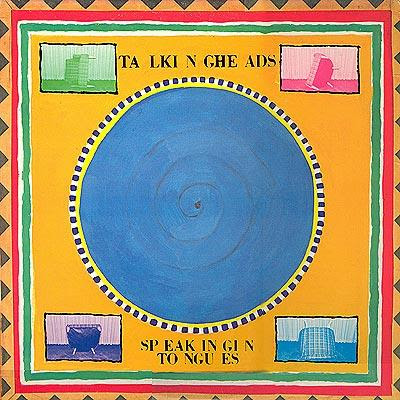 It’s hard to think of an artist who was as diverse as Rauschenberg. From influencing avant-garde composer John Cage’s "silent" classical work 4'33" to creating a Grammy Award-winning album art for the Talking Heads' 1983 album Speaking in Tongues (above), Rauschenberg dabbled in music, theater, and anything else he could finagle his way into. The bizarre tennis game played in an increasingly darkened hall at the center of Rauschenberg’s collaboration with Billy Klüver titled Experiments in Art and Technology (E.A.T.) may be the finest Dada moment in American art, but even that moment seems tinged with a sense of failure or incompleteness. Rauschenberg’s reach often exceeded his grasp. Although he fully accepted his limitations, he still chose to ignore them. Andy Warhol gets a lot of credit for effecting a new mindset in art in his time, perhaps too much, but I believe that Bob Rauschenberg deserves some credit for trying to instigate a revolution in American art that never truly took hold. How different would American art look today (and perhaps all of American culture, from politics on down), if Rauschenberg’s “friendly boy” walking in the sunny light of optimism served as the model for a fearless pursuit of greater things.