Even casual art fans know Rembrandt’s Night Watch, the mammoth 1642 group portrait that immortalized a company of local militiamen. Rembrandt build much of his name and reputation on such self-important showpieces until he could no longer abide such self-important people, individually or in groups. Almost a century later, the market for grand group portraiture still thrived in Amsterdam, filled most admirably by Cornelis Troost. Born October 8, 1697, Troost painted The Regents of the Almoner's Orphanage, Amsterdam (above) in 1729. Troost’s Regents is actually slightly larger than Rembrandt’s Night Watch. The clothing and hair styles clearly show a century’s shift in taste, but even more significant is the shift in mood painted by Troost. The men seem relaxed and natural, not posed like action figures. You believe that the young boy on the right, one of the orphans under their care, could actually approach these men. It is as if the big wigs of Rembrandt’s day, who worked so hard to make Holland a world power, finally felt comfortable enough a century later to take a deep breath and survey their handiwork. Troost’s laidback style perfectly fitted this confident air. 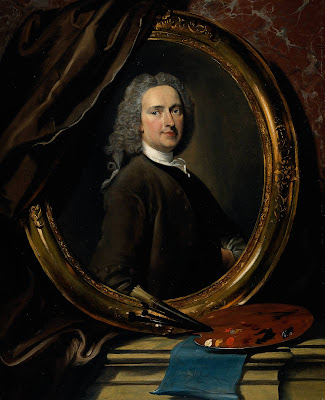 If Troost patterned himself after any artist, it wouldn’t be Rembrandt as much as William Hogarth, the English satirist. Troost’s 1739 Self-Portrait (above) even looks like Hogarth’s 1745 Self-Portrait, perhaps a sign of recognition from Hogarth. Both artists place their self-portrait in a frame within another painting strewn with the bits of their life, trying to show how their art belonged with everyday life and not separate from it. Did Hogarth know Troost’s Self-Portrait and copy his contemporary? Both artists were born in 1697, but Hogarth grew up in an England captivated by the wit and wisdom of satirists such as Jonathan Swift and Alexander Pope. Both Swift and Pope poked fun at English society and politics with a sense of moral seriousness that Hogarth translated into his highly popular prints. Growing up in Holland, Troost failed to receive a similar satiric education and his works lack the same moral punch that Hogarth’s works do. Many called Troost “the Dutch Hogarth,” but the similarities are limited. 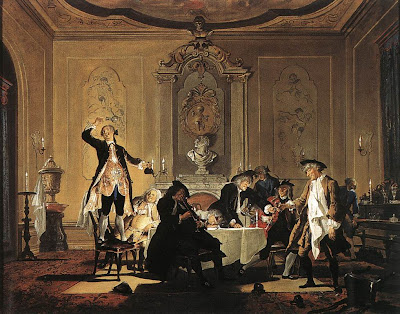 Troost’s most extended examination of social mores comes in his NELRI series, which follows the course of an evening as a group of reunited friends get increasingly drunk. NELRI is an anagram of the first letter of each of the five paintings’ Latin titles. Rumor erat in Casa (There was a Commotion in the House) (above, from 1740) shows the men partying heartily and starting a ruckus. In Hogarth’s hands, the drunks would illustrate the moral depravity of the society as well as the individual. In Troost’s hands, however, they’re simply people having a good time with good friends. If things get out of hand, Troost seems to say, it’s not the end of the world. Maybe heavy moralizing is a particularly Anglo-Saxon trait, but it’s easy to see the roots of today’s liberal Netherlandish society in Troost’s time. Just as Troost keeps a light moral touch, he maintains a light painterly touch, rendering people and things just so with a gentleness and humor that you just can’t take seriously, in a good way.