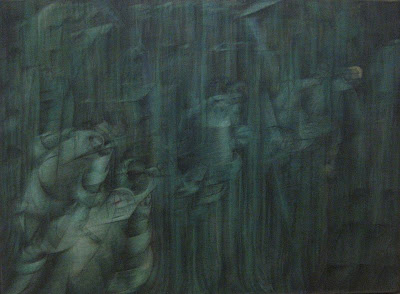 A whole generation of Europe literally died on the battlefields of World War I. The Italian Futurists, more than any other art movement of the time, lost many of their brightest stars to that conflict, perhaps none brighter than Umberto Boccioni. Born October 19, 1882, Boccioni is best known for his 1913 sculpture Unique Forms of Continuity in Space, which Italy chose to place on the reverse side of the Italian 20 cent euro coin, testifying to Boccioni’s enduring place in Italian art despite the shortness of his career and life. I’ve always found Boccioni to be as fascinating a painter as a sculpture, especially in such mysterious works as States of Mind III: Those Who Stay (above, from 1911). Borrowing heavily from the conventions of Cubism, which Boccioni learned firsthand from Pablo Picasso when the two artists met in Paris that same year of 1911, Boccioni explodes the bodies of the figures and tries to paint them from every angle at once. He complicates the issue by immersing the figures in a murky, blue-grey fog. Are these figures shuffling off to the afterlife or living beings caught up in the tempest of worldly events beyond their control? In retrospect, States of Mind III: Those Who Stay seems especially haunting in light of Boccioni’s tragic death in 1916 while training for combat, as if the artist saw himself as headed into a murky, indeterminate future. 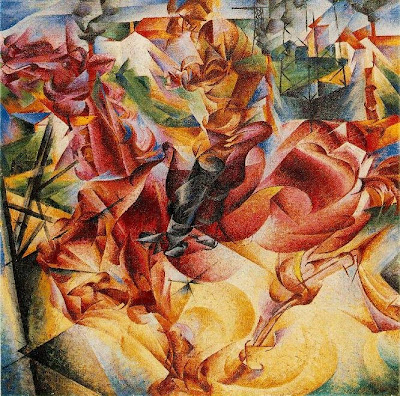 Boccioni and fellow Futurist Gino Severini studied under Giacomo Balla just after the turn of the century. Years later, Italian writer Filippo Tommaso Marinetti united these artists under the banner of his Futurist Manifesto to worship at the altar of technology and relentless, mechanized speed. Works such as Elasticity (above, 1912) illustrate how Boccioni saw the twentieth century as a huge explosion of energy and expansion. The duty of the modern artist was to celebrate that technology and give it artistic form. Just as the religious artists of the past painted saints and saviors to teach the unlettered masses, Boccioni and his fellow Futurists would paint and sculpt the works that would teach the masses of modern Europe to bow down before the gods of industry and technology. The color and energy found in Boccioni’s works are simply too infectious for me to resist, so it’s easy to judge their contemporary appeal. Faith in the future, when the past lay scattered behind them beneath a sea of disappointment, seemed the logical next step in a world that had yet to taste mechanized, large-scale destruction. 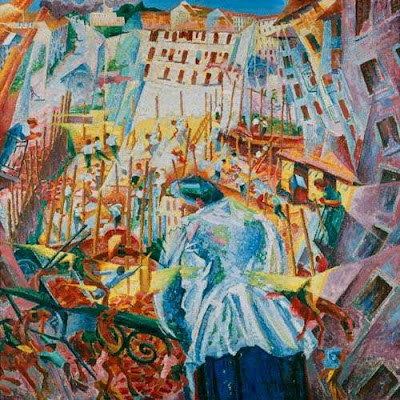 It’s tempting to condemn the Futurists for helping spur on the Great War, just as it’s tempting to say that they got what they deserved in their own destruction. (Marinetti, ironically, survived almost to the end of World War II, immune to the war-faring fever he may have contributed to.) Pushing all the politics aside, however, you cannot deny the creativity behind such a work as Boccioni’s The Street Enters the House (above, 1911). Equal parts Cubism, Futurism, and even Surrealism, The Street Enters the House depicts a believable home invasion in which the outside becomes the inside and all boundaries are erased. What kind of artist a post-war Boccioni would have been is a great guessing game to play, but ultimately unanswerable. Boccioni is much more than just Futurism or Cubism, so forcing an older Boccioni to continue along a similar path denies the expansiveness of his life and art. Boccioni couldn’t stay long enough to demonstrate everything he could do, but he remained long enough to give us enough to remember him by.

Computer Mirror Image: "THE BLUE BUTTERFLY IS 33YO NOW"