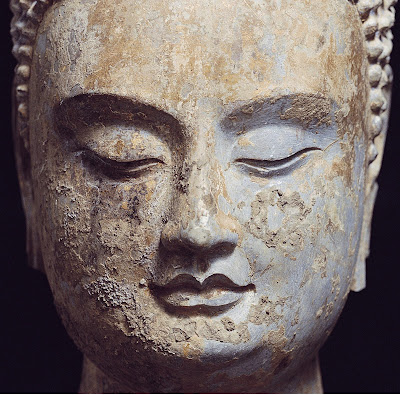 When local farmers discovered the Terracotta Army of China’s first emperor Qin Shi Huang in 1974, that trove of nearly 9,000 statues of soldiers and horses created an international sensation that continues to fascinate Western audiences today. In 1996, workers clearing a sports field in the Qingzhou section of China discovered not another ancient repository of war but, instead, a collection of peace. Four hundred Buddhist statues created 1500 years ago lay in a pit where they had been carefully placed in the ruins of a Buddhist temple sometime in the 12th century during the Emperor Huizong's reign over the Song Dynasty. The Art Gallery of New South Wales currently hosts the first exhibition outside of China of The Lost Buddhas: Chinese Buddhist Sculpture from Qingzhou. In the catalogue to The Lost Buddhas, Edmund Capon and Liu Yang explain the significance of these works and trace the evolution of Buddhist sculpture from the Northern Wei period of 500 AD to the Northern Qi period of 550 to 577 AD. The images from this exhibition are both serenely beautiful and endlessly fascinating in how they translate theology into sculpted stone while adapting to the changing world around them. “Carved with consummate refinement and precision,” Capon writes of the Buddha head above, “this head of the Buddha has little trace of the Northern Wei slenderness that characterizes the face of Buddhas from northern China and is more naturalistic and alive. The subtle smile, which lights the face, creates the sense of compassion and understanding expected of the Buddha.” These works will light your face with a smile as well while they challenge your mind to delve into the spiritual literally made concrete. 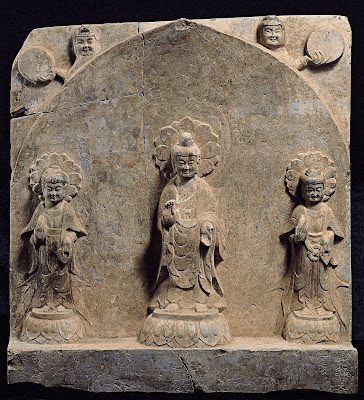 The earliest dated work, Stele with Maitreya and Two Bodhisattvas (above), hails from 529 AD. Taking this as a point of origin, the catalogue authors show how the image of the Buddha evolved as the Chinese faithful adapted the Indian models to their own culture. Early statuary usually shows Buddha flanked by two Bodhisattvas or enlightened beings. A mandorla or slab physically connects the three figures while simultaneously providing space for the Buddha’s body nimbus or halo, which symbolizes his spiritual radiance. In the back of the catalogue, the authors provide a detailed chart of the 32 physical signs of the Buddha with arrows pointing to the corresponding elements in the sculpture. This wonderful device allows you to gain a quick working knowledge of the world of Buddhist sculpture and empowers even the uninitiated in Buddhism or religious art to experience just how the sculpture works as a physical embodiment of heavenly concepts. 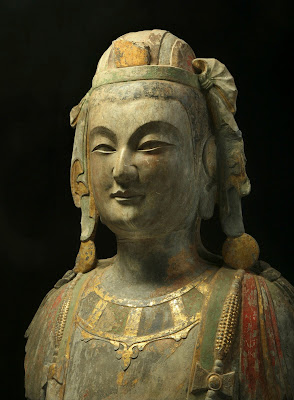 As Lukas Nickel writes in his essay on the discovery of the Qingzhou sculptures, the “amount of care and the fact that coins were scattered over the site indicate that the statues were buried with a certain degree of ceremony” perhaps in response to Emperor Huizong’s anti-Buddhist decrees. Following that theory, fearing destruction at the hands of iconoclasts, Buddhists reverently buried the works in the sunken pit, placing reed mats between the layers. Scholars credit that great care as the reason why the Qingzhou sculpture come down to us in such amazing condition. Decorative paint can still be seen on many works, such as the Standing Figure of a Bodhisattva (above) from the late Northern Wei or Eastern Wei period, 500 to 550 AD. Wearing jewelry painted in gold and brilliantly painted clothes, this Bodhisattva represents the “transition from the early, comparatively simply adorned bodhisattva to the richly ornamented bodhisattva of the Northern Qi dynasty.” Whereas earlier works basically hid the body beneath the clothing, this figure’s physical body begins to emerge from beneath as “[t]he fine lines of the folds of the thin skirt flow in harmony with the slight curves of the body.” As the sixth century progressed, the body of the Buddha and the bodhisattvas slowly came back to earth. 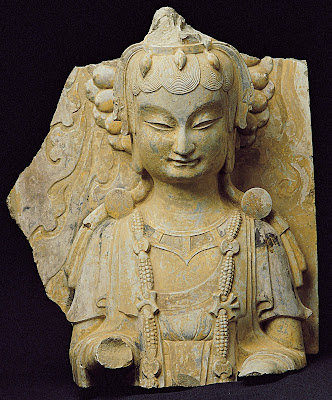 This earthiness emerges in the Eastern Wei period as artists look to local models of beauty in depicting otherworldly grace. In the figure of a bodhisattava above, we see the enlightened beings “cast as androgynous beauties, an ideal that was based, according to rumor, on local singing girls.” Like Caravaggio and other Renaissance artists patterning the Virgin Mary on local, real-life stunners (even prostitutes), Chinese Buddhist artists took what was right before their eyes and made it eternal. “The coldly classical head of the Northern Wei period” is therefore “transformed into a locally inspired physiognomy.” The Lost Buddhas excels in bringing a long lost culture to life through these works, demonstrating how these museum pieces once played vital roles in the lives of communities of believers. For a Westerner with only cursory knowledge of Buddhism, The Lost Buddhas serves up an ancient world with endlessly diverse, yet somehow familiar flavor. 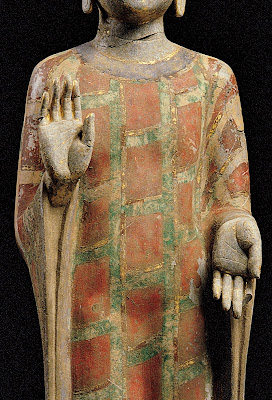 The Lost Buddhas will make you long to go back to see every piece of Buddhist (and other religious) art you’ve ever cursorily passed thanks to your ignorance of the faith. In the standing Buddha above, which still retains much of its original paint applied nearly fifteen centuries ago, the patchwork pattern seems purely decorative to the uninformed. Learning that that patchwork field represents a rice field to be harvested, which, in turn, represents the Buddhist futian or “field of merit” that those who display generosity will “harvest” in the afterlife, you discover a whole new universe of meaning in every little detail. Such attention to detail soon become addictive. This example also demonstrates the increasing physicality of representations of the Buddha, who now stands free of a mandorla and can be viewed in the round like a living, breathing being. 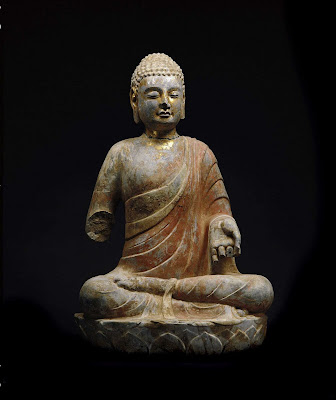 By the end of the story told by The Lost Buddhas, we see seated figures of the Buddha (above) looking down in contemplation rather than straight ahead at the viewer. The almost fleshless, standing figures disembodied by heavy robes now sit among us, relaxed, almost sensuously fleshy, with their clothing often clinging to their clearly present bodily form. Such “innovations” from Indian models, “particularly in the drapery and pleats, show a distinct Chinese flavor.” Many modern Westerners, from Thomas Merton to The Beatles, have looked to Eastern religions to reorient their lives on a more spiritual plane. The Lost Buddhas recovers an ancient place when Buddhism itself was finding its way in the Chinese world and brings a comforting moment of tranquility through art to a modern world desperately in need of serenity now.

[Many thanks to the Art Gallery of New South Wales for providing me with a review copy of the catalogue to The Lost Buddhas: Chinese Buddhist Sculpture from Qingzhou and for the images from the exhibition above.]