Tears of a Clown 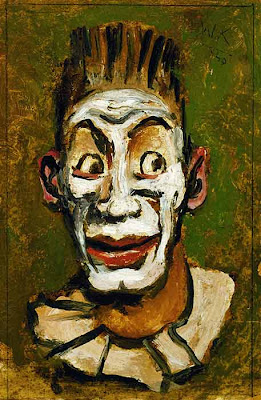 Every family has at least one elderly aunt who collects tchotches of some kind. I have one who collects clowns in all forms—painted plates, porcelain figurines, snow globes, you name it. If only she had something by Walt Kuhn, I could forgive her. Born October 27, 1877, Kuhn painted clowns and other circus performers repeatedly over the last eight years of his life in the 1940s, when mental instability and chronic ulcers plagued him. Kuhn reportedly obsessively attended circuses such as Ringling Brothers Circus, perhaps seeing something of himself in the faces of the performers. Fright Wig (above, from 1940) shows one of the clowns in an almost menacing way, totally devoid of laughter. Today, Kuhn is remembered more for his efforts to introduce modern European art to America than his own paintings, but works such as Fright Wig seem frightfully close to the best that German Expressionism offered decades before. 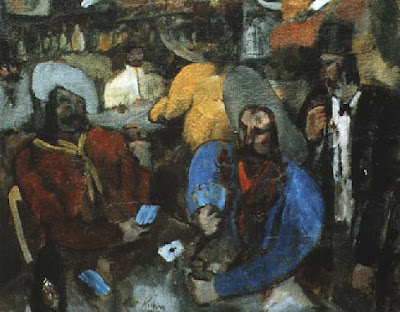 Along with Walter Pach and Arthur B. Davies, Kuhn helped organize the (in)famous 1913 Armory Show that gathered together somewhere in the vicinity of 1,250 works of art by more than 300 of the best European and American artists painting in Impressionist, Fauvist, Cubist, and other modern styles. Thanks to the Armory Show, figures such as Marcel Duchamp, Paul Cézanne, Pablo Picasso, and Henri Matisse finally found a toehold on American shores and invaded the American art scene for good. Much of Kuhn’s art appears to be an attempt to respond to those artists—a reply in hopes of sneaking out of their huge shadows. In 1918, Kuhn traveled to the western part of the United States to paint a series of works he called An Imaginary History of the West. In The Longhorn Saloon (above, from 1918), Kuhn evokes the smoky atmosphere of the stereotypical Wild West barroom. You can almost hear the piano player in the background. The rough handling of the figures shows Kuhn’s debt to European modernism, but the subject matter illustrates how Kuhn sought to take those European models and make them unquestionably American. 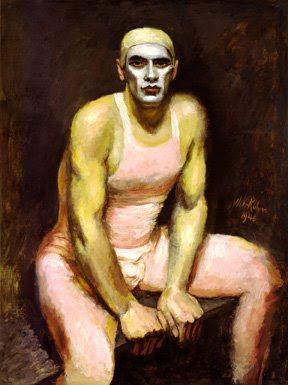 All of Kuhn’s paintings of circus performers carry a sense of sadness you sense even if you don’t know anything about Kuhn’s mental state at the time. A work such as Roberto (above, from 1946) shows a typical clown in an atypical pose of weariness with the world. Looking at the starkness of Kuhn’s portraits of circus people, usually set against a plain backdrop, I think of German art again, not the Expressionists but instead the New Objectivity of artists such as Otto Dix, George Grosz, and Christian Schad. Like those German artists, Kuhn wanted to paint reality as he saw it—not just the surfaces of society but also the soul suffering underneath. Kuhn’s ability to render the fixed stare of his subjects into something both pleading and accusatory lends his portraits a deep psychological intensity. First mired in World War II and then caught up in the sad recognition of a world in which the Holocaust and Hiroshima are possible, Kuhn dealt with life through his art as best as he could. Like his clowns, however, Kuhn thinly disguised his inner turmoil through his art.